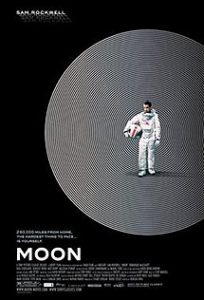 I wish even a fraction of the big budget science fiction films coming out of Hollywood were as classy and intelligent as Moon (2009), a small-canvas, simple, but smartly effective SF film anchored by an award-caliber performance by Sam Rockwell.

Rockwell plays Sam Bell, the one-man caretaker for a mining facility on the dark side of the moon. Nearing the end of a three-year contract, Bell is looking forward to getting back to Earth to see his wife and kids. With nobody for company except his AI companion GERTY (voiced by Kevin Spacey, channeling 2001′s Hal), Bell sustains himself with work, model-making, exercise, and infrequent video messages from his wife, live communications being impossible due to constant maintenance issues. Just as Bell is counting down the last two weeks of his assignment, though, he begins experiencing mysterious visions, and his work suffers, leading to accidents. He feels he’s losing his mind, but is he?

Moon is probably the best “real” SF movie I’ve seen since Sleep Dealer, presenting its SF material interestingly and conscientiously; refreshingly, it puts realism (for the most part) over spectacle. It’s a well structured story, and while some of the genre twists may not surprise seasoned SF readers, others will; the film does a nice job of changing directions just enough to maintain its eery sense of intrigue. It’s an attractively shot film, with the silent lunar scenery standing out in particular. But the film succeeds primarily on the strength of Rockwell’s assured acting; he carries the picture almost single-handedly. It’s not flashy and perhaps will be bleak for some, but it’s an excellent dark SF mystery with an unusually satisfying final note.