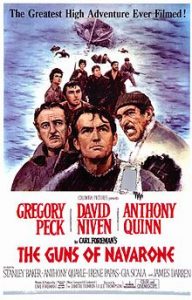 Does the end justify the means? This is a common question raised in spy films, and it’s the central ethical dilemma of The Guns of Navarone (1961), a sweeping, powerful war epic about a truly impossible mission.

Set during World War II prior to the Allied invasion of France, the film details the efforts of a British commando team to execute a daring raid on the island of Navarone in the Aegean Sea. The British need to rescue a garrison of 2,000 helpless troops from a small island off the coast of Turkey, currently targeted for German invasion. But the only escape route is throught a strait that falls under the dominating gun positions of an impregnable German fortress on Navarone. Any attempt to send ships on a rescue mission is bound to meet with failure unless the guns can be knocked out. To this end, a six-man strike team headed by Major Roy “Lucky” Franklin (Anthony Quayle) is organized to take out the guns — a task deemed a suicide mission, even to those who conceived it. Also crucial to the plan are Captain Keith Mallory (Gregory Peck), whose mountain-climbing skills will enable the team to infiltrate the island at its one weak point; Colonel Andrea Stravos (Anthony Quinn), a Greek officer who knows the territory; and Corporal Miller (David Niven), a responsibility-shirking demolitions genius. The team needs to make it to the island, rendezvous with Greek resistance, and somehow penetrate the fortress to destroy the guns, so that the British Navy can safely navigate the strait and carry out their rescue mission.

I’d always pegged this one as more war film than spy film, and indeed there’s plenty of military action: firefights, hand-to-hand combat, and conventional battles. But there’s definitely a cold war running beneath the hot one. The covert nature of the operation means the team can be executed if captured, and their interactions with the locals, the Greek resistance, and the German occupying force leads to considerable intrigue. It’s here that the dramatic firepower of the piece lies, as the twists and turns of the plot force the team to confront impossible moral decisions at every turn, in the name of accomplishing their task. The cast superbly handles these moments, particularly Peck as the reluctant pragmatist, and Niven as the team’s fed-up conscience.

It’s easy to see why this one is considered a classic: exciting action sequences, superb acting, breathtaking island scenery, and a beautiful Dimitri Tiomkin score all enhance a well executed story depicting the ethical struggles of wartime.