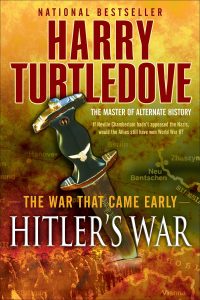 World War II is a subject tailor-made for alternate history speculation. The conflict was just so vast, so complex, and so chaotic that the possibilities for divergent events and radically different outcomes are just countless. I have to admit, I find the subject fascinating, but oddly I haven’t read much fiction in this vein, and little of it satisfying.

My only previous encounter with Harry Turtledove’s alternate history work at novel length is Days of Infamy (2004), which speculated on a different Pearl Harbor; what if the Japanese had followed up their airstrike with a land invasion? I didn’t much care for the book, which felt sloppily written and overlong, and didn’t stretch itself much beyond its narrow theater of focus, little investigating the consequences of its changed scenario. And irritatingly, without advertising itself as such, it was the first book of a two-book series, so it didn’t even resolve. I was more than happy to leave that timeline firmly in the past.

But I’ve been in a “second chance” frame of mind lately, and allowed Turtledove’s latest to find its way onto my shelf. Hitler’s War (2009) has a considerably more interesting and ambitious premise: what if the British and French had drawn their line in the sand earlier than they did in our reality? In this timeline, Chamberlain and Daladier refuse to cede Czechoslavkia’s Sudetenland to Hitler at Munich, thus kicking off the hot war in Europe a year earlier. Through the eyes of a massive cast of soldiers and civilians from most of the major combatant nations — Germany, England, France, Russia, Czechoslavkia, and more — the book spins out an alternate sequence of events. This is no small feat, for it isn’t simply a matter of subjecting the Czechs to the intial blitzkrieg rather than the Poles. It forces into consideration a plethora of altered circumstances. The Spanish Civil War is still raging, here with a more committed Fascist ally, General Sanjurjo, in command. The shocking nonaggression pact between Russia and Germany hasn’t come to pass, and Japan’s military ambitions are still directed toward the Asian continent rather than south into the Pacific, among other things. In light of all this, will a stingy Czech foe, defending tougher, better-fortified territory than the hapless, sandwiched Poles did in our timeline, significantly change the course of history?

The answer, as I read it, is an unsatisfying “yes and no.” The situations above are all major factors in the novel’s timeline, and when addressed, they make for interesting historical thought experiments. Turtledove also does a good job detailing how one year less of military-industrial build-up and technological advancement, on both sides of the conflict, might have affected the course of events.

Unfortunately, the novel spends less time on its genre conceits and its broader geopolitical situations than it does on painstakingly, and quite repetitively, reconstructing – with a certain amount of realism, perhaps – the day-to-day lives of the people subjected to this war’s perils. Largely, this means it focuses on the  precarious lives of the soldiers on the ground, in the air, and at sea. There are also threads involving the plight of a Jewish family in Germany, and a stranded American tourist who winds up in Berlin. But ultimately it focuses so closely on these day-to-day details – the horrors of war, the paranoia of living in a Fascist police state or Stalin’s Russia, the helplessness of being a Jew under the Nazis, the banalities of soldierly life – that it’s hard to see the speculative wood for the historical trees. Most of these sentence-level details differ only minutely from a depiction of the real conflict that might occur in a non-genre historical novel. Which isn’t to say Turtledove doesn’t know his stuff. But since I know his stuff, too – enough of it, anyway — I felt like I wasn’t being shown anything.

This wouldn’t have bothered me so much if all these individual stories had been interesting and engaging, but unfortunately that isn’t the case. The characters are thinly developed, basically conduits through which to view the period, at the mercy of their orders, their police, or their bad luck. They all have the same motivation: get through the war. And while there are some minor traits differentiating them, they’re all cut from generally the same cloth, and ultimately pretty forgettable. Their world is interesting, but sadly, they just aren’t.

Also, be forewarned, since again the packaging fails to do so: this is the beginning of a series. I was rather expecting it this time, and in light of the vastness of the undertaking it didn’t surprise me. I’m not saying the future volumes might not realize some of the intriguing possibilities of the scenario; the broader historical story of the book, once parsed from the tedious narrative, is still pretty interesting. But I doubt I will be discovering that firsthand. For me, Hitler’s War succeeds as a thought experiment, but it’s not a very entertaining novel.

Film: The Imaginarium of Doctor Parnassus