Wow, a crazy few days for our felines, especially Oslo. I’ll give you the short version since most readers here probably follow Jenn’s blog: earlier this week Oslo threw up a few hairbands. We took him to the emergency room late on Wednesday night and X-rays revealed that at some point he’d developed a habit of swallowing tiny foreign objects. Hairbands seemed to his favorite, but those weren’t the only inadvisable between-meal snacks he’d been ingesting.

So far he’s recovering quite well, and we’ve got him back home, where he’s resting comfortably. Here he is chilling on the cat tower after a dose of pain medicine:

Of course, our senstitive older cat Cairo reacted weirdly to the whole situation. His plaintive cries the night of the surgery, which translated for us to “Where’s my brother?,” gave way to a general freak-out when Oslo returned, smelling like a hospital. Cairo hid for hours and we don’t think he was eating or drinking. Then this morning he threw up, then totally lost his balance…his legs went out from under him and he couldn’t walk. A scary moment, but he rebounded quickly. We got him checked out just to be safe and he looks good now, is eating and behaving normally again. He’s even coming to terms with his brother’s shaved belly and odd scent. Here’s Cairo after his traumatic vet visit: 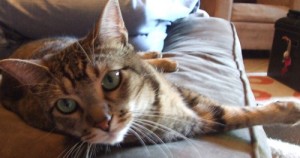 All in all, its been an exhausting, stressful, expensive few days. Hopefully both our boys are on the mend now!