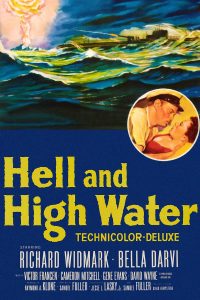 The Spy 100 list is dotted with selections included for novelty value and variety, and I expect Hell and High Water (1954) is another of these curiosities: a budget-conscious Cold War adventure from rogue auteur Samuel Fuller. It’s a film very much of its era, but with a few strikingly progressive flourishes when viewed in historical context.

The story opens as former Navy officer Adam Jones (Richard Widmark) arrives in Tokyo, at the behest of an international consortium of scientists and shady intelligence types who want to hire him for a top secret, privately funded mission. It’s suspected that the Red Chinese have set up an atomic test facility somewhere in the North Pacific. They need Jones to command a decommissioned Japanese submarine, shadow a freighter suspected of supplying the base, and deliver a research team — specifically, brilliant French atomic scientist Professor Montel (Victor Francen) and his equally brilliant assistant Denise (Bella Darvi) — to the island to gather evidence of atmospheric nuclear testing. A true mercenary, Jones takes the job and sets off with an international crew of misfits. Along the way there’s adventure, intrigue, romance, and tragedy, as the members of the expedition confront tight spots and tough choices.

This is by no means a great film, but it’s not at all a bad one, and often interesting. The pacing is uneven — slow in the beginning, but ramping up later — and the plot isn’t terribly complicated. But there’s a certain mystique to its scenario, particularly in its depiction of a clandestine, supranational organization working together toward a common goal — an unusual show of international cooperation during a time when the lines are usually more starkly drawn. Subversively, Fuller gives one of the most heroic roles to a minor Chinese crewmember, even as China is depicted as the film’s major enemy. Less sure-handed is the treatment of gender — at times it’s difficult to tell whether it’s the crew that’s objectifying Denise, or the script. The film squeezes far too much mileage out of its “woman on a boat full of superstitious seamen” shenanigans, and Denise’s attraction to a cold-blooded mercenary like Jones is inexplicable. At the same time, Denise is no standard femme fatale, a brilliant scientist who speaks six or seven languages and proves far more competent and less troublesome than the crew resenting her presence. The unusual treatment, for its time, of both nationality and gender gives the sense of a film working within the framework of its era, but also attempting to subvert it.

As a straight-up spy adventure, though, Hell and High Water is mostly standard fare, creatively shot for its tight budget. Its few sea battles and firefights stand out in a picture filled with claustrophobic submarine and stage sets. Widmark is as steely jawed as ever, and its signature, thematic line of dialogue is a nice turn of phrase. I doubt I would have placed it this high on the list, but it does plenty to warrant its inclusion.