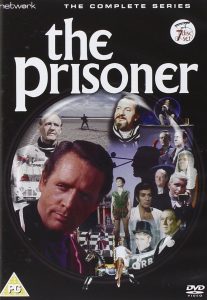 I went into The Prisoner (1967-1968) understanding it’s one of those TV shows anyone interested in the medium and its history should know about. It certainly lived up to that expectation, but not at all in the way I expected. It’s much, much weirder!

The show stars Patrick McGoohan as “Number Six,” and it’s considered an unofficial sequel to his conventional spy series Danger Man. Number Six resigns from the intelligence world, only to be abducted and imprisoned in The Village, an odd seaside town filled with political prisoners, each represented only by a number. It quickly becomes clear that escape is impossible, and The Village’s leadership — represented by Number Two, who changes each episode — is determined to wring every last ounce of useful information out of its citizens. Compliance and conformity are rewarded, and resistance is punished. Nobody resists quite like Number Six, who engages in battles of wits with his captors on a weekly basis, sometimes losing, sometimes emerging victorious.

The series lasted just seventeen episodes, and it’s easy to see why it wasn’t extended further: the premise is somewhat limiting, at least on the surface level. Episodes tend to follow two tracks: Six attempting to escape, or The Village attempting a new interrogation method on him. The escape episodes quickly grow repetitive, in rather a Gilligan’s Island manner, while the interrogation episodes — generally more interesting — are just as destined to return the story to its comfortable, episodic starting point. So the overall shape of each episode is generally predictable, but even so The Prisoner manages to be wildly inventive within its format, combining spy tropes with outrageous science fiction concepts, political metaphor, and disturbingly weird humor. The journey is the destination, here, and looking at the show as a broad, experimental allegory is the way to go, with the major theme being its examination of the individual’s struggle to maintain identity in a cruelly homogenizing state. This lends the show a kind of creepy power, even in weaker episodes that lack satisfying plot structure. Intriguing turns of phrase and thought-provoking exchanges of dialogue are common throughout the run.

The Prisoner also has the odd distinction of managing to be dated and ahead of its time simultaneously. In many ways an obviously time-stamped product of the sixties, the show is also groundbreaking in its techniques, the scope of its ambition, and in its “anything goes” approach to executing wild ideas. The insane fashions of The Village give the show an unmistakeable, colorful look, as does the unique architecture of the town (which apparently inspired the series). The filmmaking, while sometimes budget-conscious, is often quite visually striking. (Take, for example, “Many Happy Returns,” a frustrating episode structurally that contains some really impressive visual story-telling, particularly in its first half.) The music is alternately playful and creepy. And some of the ideas…I mean, escaping prisoners are chased down by bouncing, sentient balloons…and in one episode I swear I saw a drumset being played by a statue of a sheep!  Television shows this bizarre simply didn’t exist back then; even today it seems decades ahead of its time in terms of genre content, a mindset that would lead ultimately to shows like The X-Files and Twin Peaks.

The enigmatic McGoohan carries the proceedings with equal parts smug charm and righteous fury, all with an inscrutable expression on his face, and his struggles are fascinating to watch. The series grows increasingly more experimental and fearless as it goes along. The early, conventional spy “false journey” strategy of “The Chimes of Big Ben” leads next to a show where The Village’s masters leverage dream-controlling technology in their interrogation of Six. Then there’s “The Schizoid Man,” wherein Six is programmed to think he is actually someone else entirely, whose job it is to break Number Six — one of the highlights of the series for me. But things really get odd in the later stages. The bizarre western-themed “Living in Harmony,” a somewhat tedious episode, nearly redeems itself with an odd Philip K. Dickian resolution. The gem of the series is probably “The Girl Who Was Death,” a surprisingly playful interpretation of the series premise, while the final two episodes of the series, “Once Upon a Time” and “Fallout,” provide a mind-blowingly strange wrap-up.

All this said, The Prisoner might not resonate much with modern viewers — certainly it needs to be examined in historical context (both in terms of world history and TV history) to be fully appreciated. I think I may have liked the idea of it more than the reality.  But I’m definitely glad I watched it; I really don’t think there’s anything else quite like it, which is an accomplishment in itself.

Futurismic Fiction for June: “Miguel and the Viatura” by Eric Gregory