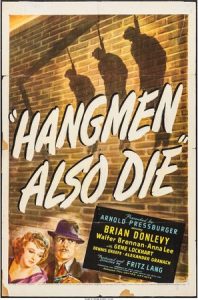 Certainly not for the first time nor the last, we’re back to World War II for Hangmen Also Die! (1943), which comes with a considerable pedigree, with Fritz Lang at the helm and Bertolt Brecht contributing to the script. Despite some indisputable espionage trappings, I’d probably classify this more as a wartime drama than a “pure” spy film, but it’s certainly satisfying – if not entirely enthralling – on both counts.

If the era is well trodden, the geography is not: the setting is Nazi-occupied Czechoslovakia in 1942, at the height of Nazi dominance in Europe. The Czech resistance strikes a blow for the Allied cause by assassinating infamous Nazi butcher Reinhard Heydrich, sinister figurehead of the German “protectorate.” Fleeing the scene, one of the Czech assassins, Dr. Franticek Svoboda (Brian Donlevy), finds himself in a tight spot when his getaway car is forced away by a German patrol. By sheer chance, young Mascha Novotny (Anna Lee) finds herself positioned to misdirect the German forces searcing for him – much to her later regret, as it turns out.  Svoboda, with no other option, later seeks refuge in her home. Reluctantly Mascha and her father, a respected professor and political leader (Walter Brennan), shelter the assassin just as the incensed authorities ramp up their retaliatory crackdown on the Czech populace. When Professor Novotny is rounded up by the Nazis, as one of 400 political prisoners ultimately used in a ploy to lure out the assassin, Mascha finds herself in a horrifying position, watching her father suffer for the heroic “crime” of a Czech patriot, and having to make dark, impossible decisions about which of them to save, and why.

Hangmen Also Die! is a dark, intense drama that doesn’t pull its punches — by the standards of its time, at any rate. It’s a grim depiction of cold-hearted Nazi brutality, and a rousing tribute to those who lost their lives to combat tyranny, often paying the greatest possible price. By contemporary standards the film is somewhat slow and unwieldy, clearly the product of a more patient filmgoing era. Or perhaps in its faithfulness to history, it overextends itself a little; the story mutates from a suspenseful manhunt into another kind of film altogether as, later on, the Czech underground works to turn the tables. But it’s certainly an effective film that doesn’t shy away from its subject matter. Lang’s direction is crisp and stark, and there’s a sober, noir flavor to the proceedings, particularly in its realistic, unglamorized violence. The performers are adequate, if unspectacular, and at the end of the day, the story closes satisfyingly.

In the overall scheme of the genre, my guess it that Hangmen Also Die! would be a pick for completists only, particularly those with more patience for the talky rhythms of older movies. But students of history, both of the era and of film, will find plenty worth investigating here.