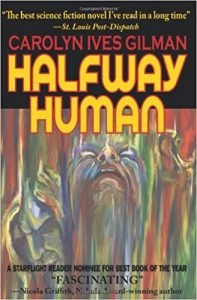 Why haven’t I heard of Halfway Human until now? I found myself asking this question frequently while reading Carolyn Ives Gilman’s 1998 debut; it’s so good, surely it made some noise back when it came out, right? Was I out to lunch? Was science fiction? At any rate, this is superb SF, a novel people should know about.

My science fiction interests tend to be closer to home, and to the present, than this far future tale, which depicts — in glorious, convincing detail — not one but two thoroughly imagined cultures descended from our own after an interstellar diaspora. It’s the story of Tedla, a “bland” from the planet Gammadis, whose suicide attempt brings it by chance into the life of xenologist Valerie Endrada on Capella Two. In investigating Tedla’s history and the reasons for its despair, Val uncovers the hidden truth about the faraway culture of Gammadis. There, gender is not determined until children come of age, but not all children become men or women; the unlucky ones become “blands,” who remain in their “natural,” neuter state, and find themselves reluctantly indoctrinated into a working underclass, conditioned to expect nothing of themselves but mindless, obedient servitude. Tedla is burdened with good looks and considerably more intelligence than blands are “supposed” to possess, which make it stand out in a situation where standing out is not an asset. Fate takes Tedla through this unjust culture’s darkest passages, but its story is less one of an individual versus society as it is one of someone at war with itself. Despite cruel treatment and every inclination to be a proper bland, Tedla achieves the utmost importance in universal affairs, not only to the Gammadian establishment, who want to quiet her story and send a message to the bland underclass, but to the greedy, opportunistic information companies of Capella Two, who want to benefit from her unique insight as a bridge between cultures.

Halfway Human is compelling science fiction on just about every level. It succeeds spectacularly in its world-building, first of all. Gammadis is a rich, fascinating, thoroughly developed world, with much more depth and degree than my villainous “evil society” thumbnail gives it credit for. The tri-gendered society is confidently rendered, and I can’t think of a more convincing depiction of life under a tyrannical, unjust system…that isn’t a historical novel, that is. Even as Gammadis is center stage, Capella Two — the more Earthlike world — is given real character for its highly regulated information economy. And it’s through Capella Two that the novel succeeds — again, spectacularly — as metaphor. The concept of “blandness” in the book extends beyond gender difference to a broader examination of a the human condition, in any society where power is commodified and concentrated. The book is full of interesting gender politics, but to me, thematically, it’s class politics that are even more strongly realized.

Finally, the novel succeeds wonderfully on the storytelling level. For all the thought-provoking material — political, sexual, social, science fictional — it’s the storytelling that may be the most impressive to me. Gilman juggles multiple tracks and timelines with sure-handed authority, and while the history-mining backstory of Tedla’s life journey clearly dominates, the urgent present crisis of Val trying to help Tedla is just as compelling. Often science fiction makes narrative sacrifices for the sake of its ideas — clunky infodumps, sloggy exposition as reading protocols are established — but this book, while no less rich for it, benefits from smooth, engaging prose that tells the story well.

Be warned, this is dark, dark stuff on many levels, and perhaps not for the faint of heart. But I found it inspiring and full of wisdom, and the payoff in its final moments is well worth it. This is the best SF novel I’ve read in a very long time.