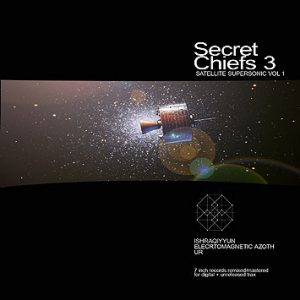 Although challenged recently by Panzerballett (the jury’s still out!), Secret Chiefs 3 — with its mash-up of metal, surf, techno, and Middle Eastern sounds — still holds the title as my reigning favorite band. Any release of theirs is an event for me — even this one, Satellite Supersonic, Vol. 1 (2010), which is the kind of “throwaway” compilation that bands usually issue to bridge the gap between “real” albums. That’s pretty much the case here, as well: most of the tracks on this collection were released as vinyl-only singles, here remastered along with a couple newer ones and a self-cover of “Anthropomorphosis: Boxleitner” (how can you not love that title?) from Book of Horizons.

The songs are attributed to three of the seven SC3 “satellite bands,” and my favorite here are those from UR: the opening Middle Eastern surf-grooves of “Circumambulation” and the infectious beat of “Culturvultur” are the gems of the album for me. (I’m not sure the “Boxleitner” remix, also from UR, did enough to distinguish itself from the original to warrant a second take.) There are two Ishraqiyyun tunes here, and these are more eclectic, with curious imbalanced meters and what sounds to me like more traditional Middle Eastern instrumentation: “Balance of the 19” is the more distinctive (a weird, drunkenly lurching march) and “Balthassar:Melchior:Caspar” the more listenable. The two tunes from Electromagnetic Azoth are more abstract, ambient, and soundscapey. There’s also a mystery bonus track that sounds like it was composed on a 1970s organ.

There isn’t a song on the compilation that isn’t of some interest. That said, it doesn’t quite hold up to “purer” SC3 albums. SC3’s masterpieces — Book M and Book of Horizons in particular, plus their recent Traditionalists satellite release Le Mani Destre Recise Degli Ultimi Uomini — feel like well structured journeys, and Satellite Supersonic, Vol. 1 lacks that cohesive, story-telling feel. I’m more than happy to add its tunes to the collection, but unfortunately it’s a notch below most of their work for me. Not that I’m still not hungry for more — I can’t wait for their next album (supposedly due this fall).