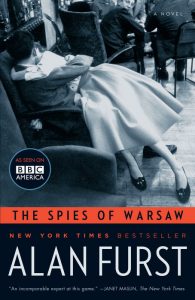 The latest, excellent Alan Furst adventure, The Spies of Warsaw (2008), takes us to Warsaw in the mid-thirties, where newly appointed French military attache’ Jean-Francois Mercier, a veteran of the Great War and a widower, has become a soldier of the intelligence world. His first assignment in Poland involves putting the squeeze on a German who’s fallen into a French honey trap and is well placed to provide insight into German armor production. From here, Mercier’s intelligence-gathering efforts evolve to paint an ever-clearer picture of German military intentions, as he combines reluctant forays into diplomatic circle gossip with hands-on, in-the-field adventures running agents, investigating the German-Polish frontier, and spying on Wehrmacht military exercises. Along the way, he falls for a lawyer for the League of Nations, Anna Szarbek; becomes entangled with Russian spies jeopardized by Stalin’s purges; acquires a brutal nemesis in the SS; and makes contact with a potentially important, highly placed German scientist. Mercier carefully balances duty, expediency, and personal happiness as he fights this clandestine battle against the increasing Nazi menace.

I find it hard to comment on a Furst novel without first mentioning its unwavering adherence to a distinctive formula, and then adding how much I don’t care about that, because it’s such a great formula. But with The Spies of Warsaw it strikes me that Furst’s work is changing, subtly. As opposed to the sprawling, epic scope canvases of his first few books, his more recent ones have been impressively focused works, happy to center on their protagonists and one specific area of historical interest. If the earlier works felt more immersive and comprehensive, these more recent ones feel brisker and more intense.

Either way, Furst always delivers a vivid window into the past, both entertaining and illuminating. The Spies of Warsaw is a tightly composed and thoroughly engaging novel that leaves you wanting more, but happily so.