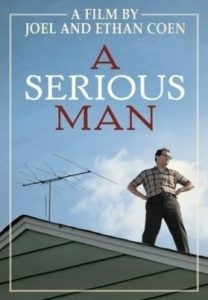 One of the things I love most about watching a Coen Brothers movie is the sense that I’m definitely getting a focused personal vision, a film that definitely could not have been created by just anyone.  There’s a distinct personality to their movies that mainstream Hollywood just can’t replicate (even if it wanted to). A Serious Man (2009) isn’t my favorite Coen Brothers movie, but it’s a good one, and it’s got such personality, I find it hard not to respect it.

Set in suburban Minnesota during the 1970s, A Serious Man is the story of Dr. Larry Gopnik (Michael Stuhlbarg), a math professor whose life takes a series of unfortunate turns — marital issues, professional strife, legal run-ins with his prejudiced neighbor, and on and on. Gopnik, who hasn’t done anything to anyone, desperately seeks wisdom, but his every attempt to find it — especially from the local rabbis — only makes him feel more lost. Will he find enlightenment, or even relief?

The sense of humor is as dark and quirky as ever here, but the laughs aren’t quite as frequent as usual.  Understandably so, though, for while it’s a comedy on the surface, it’s a pretty sad story at its core. Stuhlbarg is terrific as the beleagured protagonist, and as usual with the Coens there are tons of memorable bit characters — particularly funny is David Kang as a student attempting to bribe Gopnik for a better grade. One gets the sense this is a very personal film. I read somewhere that the Coens drew from their midwestern Jewish upbringing when they conceived the film, and the scenario certainly has a ring of authenticity to it.  Unfortunately, this one ends a bit clunkily, I suspect on purpose — but a bit unsatisfying nonetheless. I don’t always love the Coen Brothers’ films, but I’ve learned to trust them to deliver interesting, unique visions, which A Serious Man definitely deliveries. 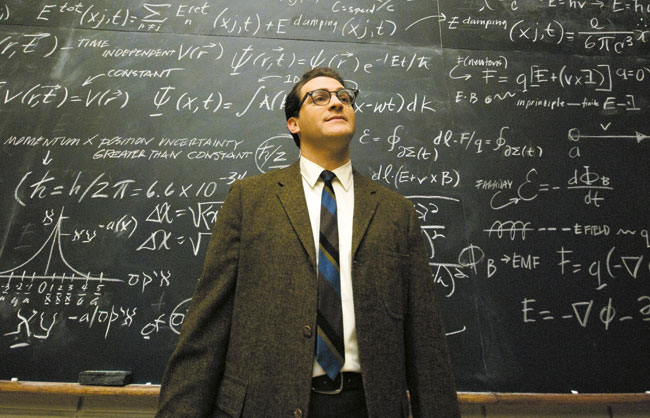