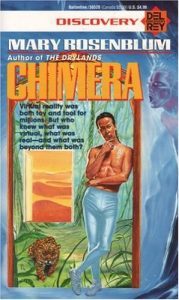 Mary Rosenblum’s second novel, Chimera (1993), focuses on virtual reality. Jewel Martina is a medical aide who has wrestled herself up from poverty, trying to make a name for herself as an information broker in the VR web. She works for a “web node” named Harmon Alcourt, a powerful controller of the internet economy who’s sequestered himself in a remote compound in Antarctica. Jewel’s struggles to swing her own deals online are sidetracked when her fate becomes entangled with a virtual artist named David Chen and his loose-cannon lover Flander, a shifty designer of VR avatars who’s run into trouble with a criminal element. Jewel’s past and David’s love for Flander thrust them into the middle of a complicated power struggle, in an adventure that leads them from Antarctica to the Pacific Northwest and back again.

I enjoyed aspects of Chimera, but overall I found it a slow read, and not all that enthralling. For a novel seventeen years old, it holds up pretty well science fictionally, and certainly feels ahead of the game in its approach to VR and AI. The internet as depicted in Chimera feels conceptually dated compared to modern reality; the way the web commodifies information doesn’t quite ring true, and the fact that the internet isn’t ubiquitous feels a little like a predictive misfire. But considered in the context of its era, it still feels like a valid, earnest guess at the future, and the ideas Rosenblum plays with here are still being examined in depth today. So even if its details aren’t quite right, it does strike me as a book that had its finger on the SFnal pulse.

Unfortunately, Chimera fell a bit short for me in its story-telling. For much of the novel, Jewel and David seem to be one step removed from the plot’s real machinations, and the proceedings feel murky until its various threads come together quickly in the final chapters. There is a sound plot running underneath it all, but it doesn’t quite propel the narrative. I also felt its focus on the theme of illusion versus reality was a bit heavy-handed, and would have liked to see more contrast in its real world; the novel’s vision of its non-virtual world is uniformly bleak and dystopic, perhaps a bit too one-note.

The prose is quite well written, the characters are distinctive, and for the most part it examines its SFnal ideas effectively; it’s not at all a bad novel. But ultimately this one didn’t thrill me.