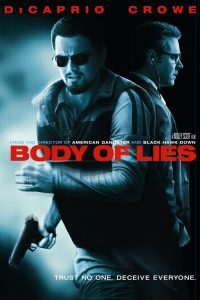 A well made film examining the intelligence war on terror, Body of Lies (2008) nonetheless feels slightly humdrum, perhaps because many of its themes and ideas have been dealt with more memorably by other films.

Roger Ferris (Leonard DiCaprio) is one of the CIA’s top men in the Middle East, and as the film opens his work in Iraq turns up a lead that may put them onto a major terrorist leader whose cell has been setting off bombs all across Europe. Ferris is reassigned by his manipulative Washington control Hoffman (Russell Crowe) to Amman, Jordan, where he makes headway in the manhunt by initiating a tense alliance with the head of Jordanian intelligence, Hani (Mark Strong). Between the hard-nosed Hani and the deceptive Hoffman, Ferris has his hands full accomplishing his mission, and things only get more complicated when his involvement with an Iranian nurse, Aisha (Golshifteh Farahani), finds its way into the intrigue.

The plot is stocked with clever gambits, its intricate machinations playing out neatly, and director Ridley Scott brings plenty of energy to the exciting action sequences. DiCaprio carries the film with aplomb, and it’s generally well acted; Strong makes for a particularly formidable foil. But there’s something a little bit expected about it all. The film’s major mission seems to be contrasting the harrowing experience of the man on the ground (DiCaprio) with that of the distant, calculating higher-ups pulling the strings (Crowe), and there’s something a little heavy-handed about how that comes off. Hardly in poor form, Crowe may nonetheless be a little too obvious a D.C. schemer for the film’s own good. Similarly, Ferris’ ill-considered romance with Aisha seems a bit out of character, pro forma plot maneuvering. A few on-the-nose turns of phrase in the dialogue also contribute to the sense of familiar thematic ground.

An earnest, well produced, and structurally satisfying film, then, but in the end Body of Lies doesn’t quite stand out from the crowd.

Futurismic Fiction for August: “Or We Will All Hang Separately” by Nancy Jane Moore