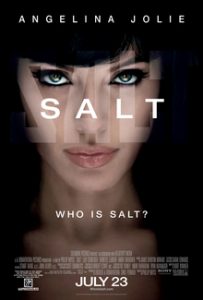 And now, a belated review of Salt (2010), which I saw last weekend at the Arclight. Salt is an all-too-plausible cautionary tale about the dangers of…no, wait, it’s a preposterous action vehicle for Angelina Jolie. But it’s not without its silly charms.

Salt is a rather odd film: a campy 1960s spy-fi premise wrapped up in ultra-violent, modern thriller trappings. Jolie stars as Evelyn Salt, an agent for a clandestine outstation of the CIA, and it’s just another day at the office until she and her boss Ted Winter (Liev Schreiber) are informed they have a “walk-in” — a Russian defector named Orlov (Daniel Olbrychski) has shown up on their doorstep, bearing gift-wrapped intelligence. According to Orlov, there is going to be an assassination in New York City later that day. The name of the assassin? Evelyn Salt. “Outed” as a Russian spy, Salt goes on the run — but is she really an enemy of the state, or is something more complicated afoot? Winter isn’t sure, but counterintelligence officer Peabody (Chiwetel Ejiofor) isn’t taking any chances, and the pursuit is on.

Salt opens as a fairly conventional spy story, but descends quickly into non-stop, often irrational action. Filled with video-game-like stunt setpieces, wild firefights, and insane switchback plotting, the film aims for and mostly delivers big-budget spectacle and frequent (if often silly) surprises. Its complicated twists and turns are pretty out there, but if you surrender to the camp early enough, the ridiculousness of it all actually works in the movie’s favor; the story keeps going places it just shouldn’t, and doesn’t care, which is kind of liberating in a way. It somehow manages to engage and insult your intelligence simultaneously.

Curious to note that Salt was originally written for a male lead, and was retooled as a vehicle for Jolie. In fact, this film is next-to-nothing without her. Jolie is becoming one of those screen figures whose celebrity persona is constantly threatening to consume her every role, but I’ve got to hand it to her: she can totally carry a film, and it’s hard to imagine Salt working at all without her. Schreiber and Ejiofor provide solid support in a cast that is otherwise undistinguished. I’d be hard pressed to recommend Salt over the scads of other, higher-quality spy films I’ve seen recently, but despite my snobbishness I still kind of got a kick out of it. 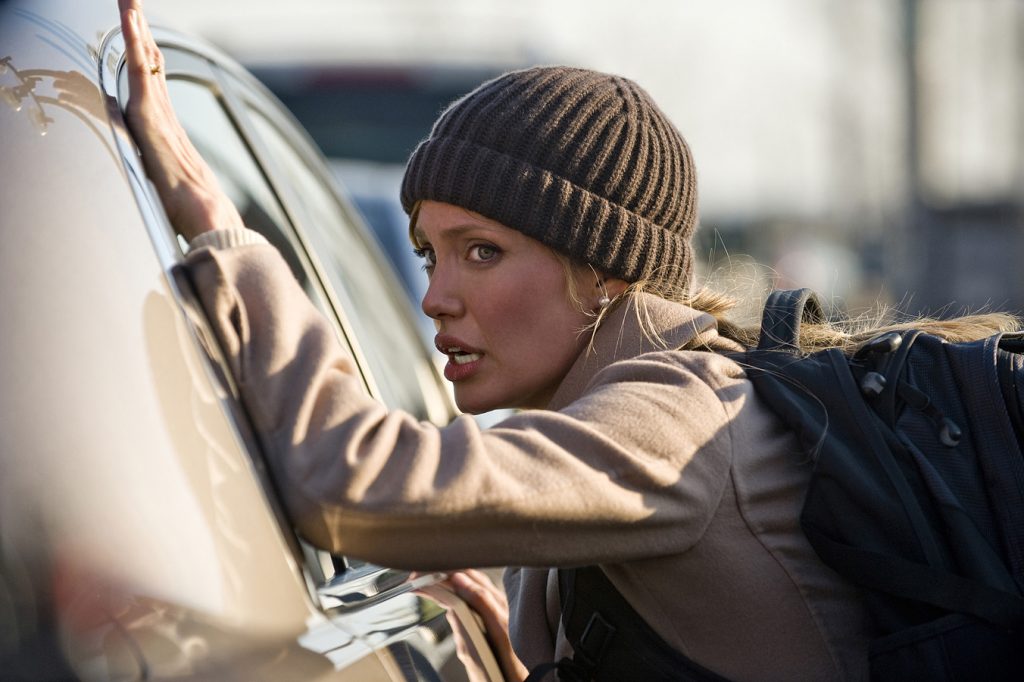