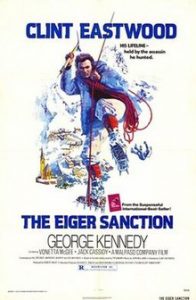 A mountain-climbing film dressed up in spy clothes, The Eiger Sanction (1975) is one of those oddball selections the list seems to include now and then just to stir up conversation. How this one ever crept so far up the list is beyond me, though; it’s not a very good film.

Clint Eastwood stars as a retired assassin named Jonathan Hemlock (ugh), whose pedigree also includes a past in mountain-climbing and a current gig as an art professor. Hemlock is lured back to the fold by his former boss in the top secret agency “C2,” a man named Dragon (Thayer David), who blackmails him out of retirement for one last job, taking out a pair of enemy agents who stole a microfilm detailing a germ warfare formula. Hemlock performs one hit, but the second looks to be more of a challenge; the target, as yet unidentified, is suspected of being a member of an international mountain-climbing expedition to scale the notorious north face of the Eiger in Switzerland. Hemlock’s mission: join the team, identify the agent, and take him out.

Is there a spy movie plot tying together the sequences of The Eiger Sanction? Sure, and it’s even got some classic elements: the retired agent pulled off the shelf for one last job, the nefarious intelligence organization with murky motives, heroes just as morally questionable as the villains, dastardly misdirections, sexy femme fatales, and a cynical (if not nihilistic) message about the costs of the intelligence game on its participants. It sounds reasonable on paper.

But is it a spy film? Not really. It feels more like a macho ego-stroke for Eastwood Circa 1975, with his iconic monotone, square jaw, and bad-ass behavior. The plot is serviceable, but fails to engage because it’s consistently trumped by its function as an action vehicle, an excuse to watch Eastwood scale mountains, thump thugs, and bed babes. The performances are wooden, and the script is full of lazy cliches, not to mention casual racism, sexism, and homophobia, a sad timestamp of its politically incorrect era.

Eastwood also directs, and not without some skill. The film makes good use of its western U.S. and Swiss mountain landscapes, and some of the mountain-climbing shots are impressively hairy. Eastwood obviously did much of his own climbing, which contributes greatly to the authenticity of those sequences. On the other hand, he overuses the wide helicopter tracking shots of nature, and the film’s pace is all over the map. Interestingly, a massive section of the film focuses on his rigorous training for the big climb. I appreciate that — most action heroes wouldn’t bother practicing, they’d just automatically be awesome — but it has a brutal effect on the film’s pace.

Meh. Most of the films on the list at least make a case to warrant their inclusion: even Modesty Blaise, in its bizarre way. But to me The Eiger Sanction is rated way too high at #67, and probably wouldn’t even get an honorable mention on my list. Fans of Old School Clint might get a kick out of its testosterone-heavy exploits, but most spy buffs will probably be repelled. Or is that rappelled?

A Weekend of Milestones