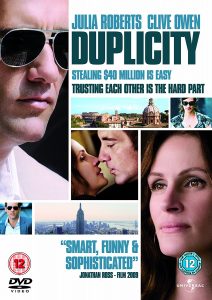 Adding a welcome, rare dash of corporate espionage to the Spy 100 list, Duplicity (2009) is a fun puzzle combining a sketchy romance with an elaborate heist. It’s an impressively structured film with a tortuously complicated script, although it’s marred somewhat by a rather telegraphed ending and an uneven tone.

CIA agent Claire Stanwick (Julia Roberts) and MI-6 officer Ray Koval (Clive Owen) meet cutely at an embassy function in Dubai and have a casual one-night stand — wherein Claire drugs Ray unconscious and steals some top secret documents. So much for the special relationship! Years later, both retired, Claire and Ray meet again in the private sector when Ray gets a job working for megacorporation CEO Dick Garsik (Paul Giamatti). Garsik has put together an “A-Team” of spies to rip off his rival Howard Tully (Tom Wilkinson), and Ray is surprised to learn that the inside agent he’s been hired to run is Claire, head of Tully’s corporate counterintelligence team. Or is he surprised? In a plot laced with flashbacks and switchbacks, lies and misdirections, we learn that the relationship between Claire and Ray is much more complicated than it seems, and so is the sordid business of corporate thievery they’ve undertaken. Who is gaming whom?

Duplicity is an impressive directorial debut for screenwriter Tony Gilroy, who handles the convoluted machinations of his plot adroitly. Less effective is the film’s tone, however; the film seems to want to be both a  breezy, fast-talking comedic romance driven by dialogue, and a modern, hip heist caper driven by plot. It sort of delivers both, but the fusion is less than seamless. It may have something to do with Roberts and Owen, two perfectly adequate performers who for some reason never really won me over here. Their contentious relationship is full of twisty, witty barbs and suspicious double-talk, and they execute it well enough, but perhaps it feels too much like argument and not enough like charming banter? The film clearly wants to be funny, but the brilliant credit sequence sets a tone never quite matched by events. (Although Giamatti, with his comically nefarious characterization of Garsik, comes close.)

The funny doesn’t entirely come off, then, but the romance still works; the relationship is entertaining, at any rate. And the plot nicely weaves the personal story in with the broader, plot-driven business, which is deftly executed. The main thrust of the plot is easy to see coming, but it’s still fun piecing together all the details.