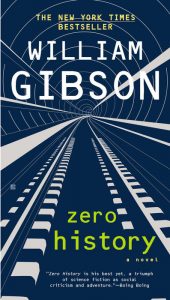 I went into William Gibson’s Zero History (2010) with high expectations. It closes the Blue Ant trilogy of quasi-SF corporate espionage thrillers, following on the heels of two novels I thought were brilliant: Pattern Recognition and Spook Country. In many ways, Zero History delivers on the promise of these earlier books, without quite out-doing them.

Once again, larger-than-life subversive marketing mogul Hubertus Bigend is at the heart of events, motivating his employees like pawns on a chessboard in pursuit of a “secret” fashion label called Gabriel Hounds. Enlisted to track the designer is Spook Country’s Hollis Henry, whose financial woes and investigatory instincts cast her once again into Bigend’s orbit. Set largely in London, the novel follows Hollis’ efforts through the murky subcultures of the European fashion world, seeking an elusive intersection of military contracting and clothing design. Also returning is the curious, recovering drug addict Milgrim, employed at the whim of Bigend…to do what, exactly? But then that’s Bigend’s (and Gibson’s?) MO — setting his agents loose in the world to see what happens. And what happens here escalates from dryly comical, improvised spy tradecraft to a dangerous confrontation between maneuvering rivals with much higher stakes.

I found the novel a muddily plotted, but enjoyably detailed, continuation of the themes and ideas of the earlier books. Gibson is clearly fascinated by the commodification of concepts, and the science-fictionalization of the contemporary world; part of what’s always impressed me about these recent books is that the closer to our present his writing focuses, the weirder and more futuristic it feels. The world through Gibson’s lens is a strange, fascinating place, and his distinctive characters move rather chaotically through it, poking at the edges of things, sussing out memes and marketing ploys, finding the connections between our behavior and our motivations. The fact that he’s doing it in the form of super-slick, darkly comic quasi-SFnal spy fiction lands it all the more squarely in my wheelhouse.

That said, in my book Zero History lacks the innovative freshness of Pattern Recognition, and doesn’t quite match the satisfyingly devious plot of Spook Country. It could just be that my love of those two books set an impossible standard for this one…or maybe it’s just a case of familiarity with the fictional world lessening its impact. I still really enjoyed it, though, especially on the sentence-by-sentence, detail-by-detail level. It skillfully rounds out what in my mind is easily Gibson’s most accomplished trilogy.

Collection: The Baum Plan for Financial Independence and Other Stories by John Kessel