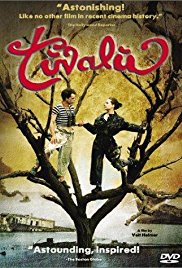 Okay, so this is a weird movie. Tuvalu (1999) is part slapstick silent film, part romantic-comedy, and several parts pretentious arthouse experiment. Filmed in Sofia, Bulgaria (or its crumbling ruins, apparently) by German director Veit Helmer, the film seems to be aiming for the clever charm of Jean-Pierre Jeunet and the visually striking style of Terry Gilliam. It achieves neither, really, but the resulting, hugely flawed film is an interesting watch, quite unlike anything I’ve seen before. I expect it will engage folks of a certain sensibility; I certainly found it worth watching, if not wholly satisfying.

The setting is a dilapidated bathhouse, where Anton (Denis Lavant) struggles to keep the business afloat despite its malfunctioning steampunk machinery and a sparse clientele that frequently substitutes buttons for coins when paying at the door. Anton falls head over heels for beautiful young Eva (Chulpan Khamatova), who is caretaking for her elderly father and living in a nearby apartment building. Unfortunately the avaricious, Marge-Simpson-haired Gregor (Terrence Gillespie) has targeted their building for new development, and it’s demolished, leaving Eva and her father homeless. The kind-hearted (if creepy) Anton takes them in, not realizing that Gregor’s evil scheme involves taking out the bathhouse as well. Gregor’s sabotage results in a serious accident that causes a rift between Anton and Eva, and brings in the building inspector. Can the bathhouse be saved, and will Anton recapture Eva’s heart?

It was with some surprise that I even detected the coherent narrative, which is conveyed almost entirely visually, underneath all the stylized flashiness. (Occasionally names and snatches of pidgin English and Italian are spoken, but in general these lines are more sound effect than dialogue.) In some ways, it’s an impressive achievement: with minimal exposition, its silent-film trappings manage (almost) to pull off a story. The creative use of its run-down sets and the bizarrely shifting, monochromatic color pallette combine to give the film a wholly unique look.

Unfortunately, the movie is clever without being funny, and playful without being charming; the lighthearted tone is marred by a number of weird, dark, icky turns. The scattershot plot aims for Rube Goldberg complexity, but doesn’t quite deliver it, too chaotic, or perhaps too indulgent, to come together neatly. I like weird movies, and this one has weird aplenty, but I only enjoyed its elements in fits and starts.

For all that, the film might have won a heartier recommendation from me had its nominal protagonist been remotely likeable. Sadly, Anton is kind of a perverted creep, painted as a well-meaning Gilligan, but whose sick voyeuristic tendencies should have repulsed Eva, not attracted her. Luckily for Anton, Eva seems to enjoy being spied on in the shower and having her panties sniffed; her girlish giggling at Anton seems like forced behavior for a character otherwise depicted as independent and tough-minded. It’s a serious chemistry-fail that a few carefully altered scenes could have easily set right. Even had all the nuts and bells and bolts and whistles of this rickety contraption come together more cleanly  — and I’m not convinced they do, entirely — the failure of this crucial, central romance is rather a fatal wound. 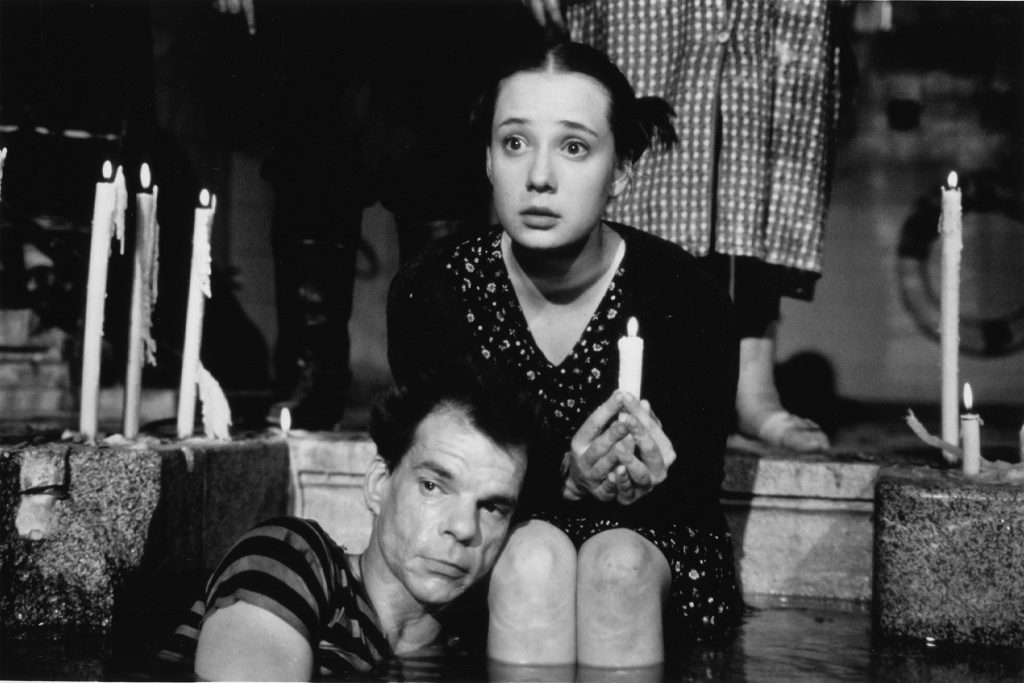