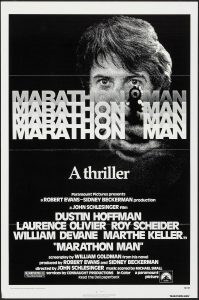 The spy elements are definitely in place, but Marathon Man (1976) ultimately feels more like a straight thriller to me, combining gritty seventies realism with taut suspense. Dustin Hoffman stars as Babe Levy, a Columbia graduate student in history, whose simple, low-rent lifestyle in Manhattan is shaken up by a visit from his wealthy older brother Doc (Roy Scheider). Doc claims to be in the oil business, but secretly he’s a spy, and one of his shady connections is a man named Szell (Laurence Olivier), a Nazi war criminal whose post-WWII exile in Uruguay has been made possible, in part, by his willingness to sell out his former colleagues to the CIA. When Szell’s brother is killed in New York, Szell has to come out of hiding to retrieve the fortune his brother was keeping an eye on, but his paranoia leads him to suspect Doc of setting a trap for him. Babe, innocent of Doc’s real job, is nonetheless sucked into the intrigue when Szell connects the brothers, sending Babe into a nightmare of fear, torture, and violence.

The film has a unique, rather odd feel: the plot is rather comic-booky, but the setting is vividly real, a stark and grimy anti-advertisement for mid-1970s New York. Just as vivid and realistic is Hoffman as an intellectual pacifist caught up in an evil secret world; his brilliantly desperate and terrified performance is utterly convincing. Olivier is also superb as the monstrous Szell, and the two actors go a long way to paving over the film’s occasional defects. Among these I would list the movie’s odd structure: the story’s point of attack comes late, after much teaser-like build-up that feels like it should be hidden backstory. It’s interesting stuff, and refreshingly patient, but it makes the film feel overlong and slightly scattered. The overarching plot is relatively straightforward, but of the few requisite twists thrown in, one in particular feels rather inelegant, convenient exposition. I found the ending satisfying without being particularly neat.

By and large, though, it’s an interesting and well made film, very much of its era. The violence is brutal, the suspense is terrifying, and the acting is top notch. 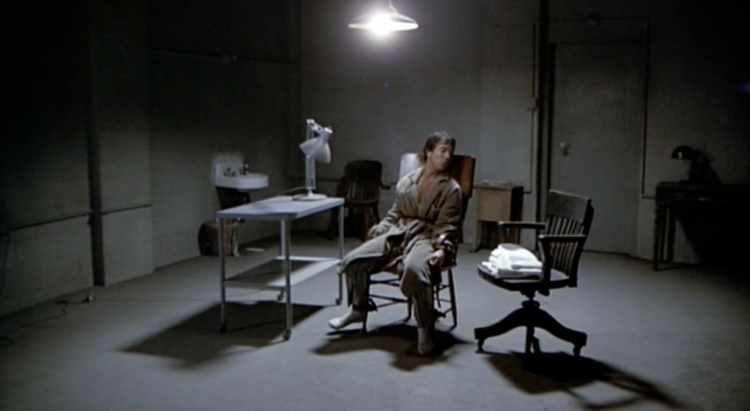 Film: The Men Who Stare at Goats