Film: How to Train Your Dragon 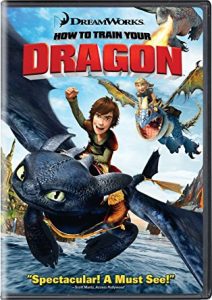 I didn’t put much thought into watching How to Train Your Dragon (2010), but it kept me interested, an engaging and gorgeously animated film about a bookish young Viking named Hiccup (voiced amusingly by Jay Baruchel) who can’t quite live up to his village’s murderous standards. Hiccup’s people are beset by dragon attacks, and fighting them off is the order of the day, but Hiccup isn’t quite physical or aggressive enough for killing. Nonetheless he sets out to connect with his father and impress his dream girl by getting his first kill. When he instead merely injures his target, he unexpectedly befriends it, and through his relationship with “Toothless” becomes something of a “dragon-whisperer” who helps change his village’s ways.

The plot is pretty formulaic, but it’s an effectively told story carried by the likeable Hiccup and the adorably rendered Toothless. Yes, there’s a silly Hollywoodness to it: here’s a “Viking culture” where people wear UGGs and children grow out of American accents and into Scottish ones…? But it’s mostly in good fun, and it’s nice to see a movie that champions learning over physical heroics, for a change. Unfortunately, the well voiced supporting cast lacks standout characters, and Hiccup’s love interest Astrid (America Ferreira) is a muddle of “token female” characteristics. But really the movie is carried by the relationship of Hiccup and Toothless, and that, combined with exciting and coherent action sequences and tons of cool dragons, made it worth watching for me.