Film: No Country for Old Men 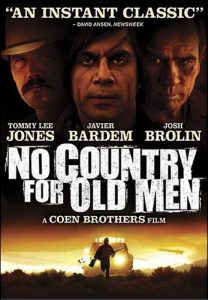 I really should make a vow to see every Coen Brothers movie. These guys are a treasure. Their best films are brilliant, but even their less successful ones are unique and lovingly crafted. No Country for Old Men (2007) is closer to the brilliant end of the spectrum, dazzlingly executed suspense marred only slightly by a wobbly final twenty minutes.

Based on a novel by Cormac McCarthy, No Country for Old Men is a western mystery set in 1980, about a scofflaw named Llewelyn Moss (Josh Brolin), a retired welder and Viet Nam veteran who stumbles across the scene of a drug deal gone bad while hunting in the desert. Simply by making off with the money, Moss puts himself in the sights of a psychopath named Anton Chigurh (Javier Bardem), who’ll stop at nothing to recover the money. What follows is a brutally violent game of cat-and-mouse, as Chigurh tracks Moss across the Texas landscape; all the while, a crusty old sheriff (Tommy Lee Jones) investigates the ongoing duel, trying to make sense of it all.

No Country for Old Men contains some of the most riveting suspense I’ve ever seen. There are stretches of absolutely brilliant visual story-telling throughout. While not without dialogue, the film works best when letting images and action tell the story. The slow-burning early stages — as we get to know the stubborn Moss and the terrifying Chigurh — set up absolutely engrossing confrontations later on. While clearly a Coen product, with the exception of the odd conversation or two this one lacks the inherent amusing quirkiness of much of their work. The tone is dark, gritty, and deadly serious, anchored by Brolin’s resourceful anti-hero and Bardem’s unbelievably menacing villainy. (If for no other reason, see this for Bardem; his performance is something to behold.)

For all the spectacular film-making artistry, the gorgeously composed shots, and the brilliantly unraveled mysteries, No Country for Old Men kind of sputtered out for me in the final stages, alas. The thrilling build-up resolves in ambiguity and mumbly conversation. It’s not entirely unsatisfying: there’s a sense of careful deliberation and thematic correctness to these late scene decisions. But for me the wind-down just didn’t quite live up to the visual mastery of the rest of the film. That said, I still highly recommend it, particularly for its patient, skillful craft, its chilling suspense, and Bardem’s unnerving performance. 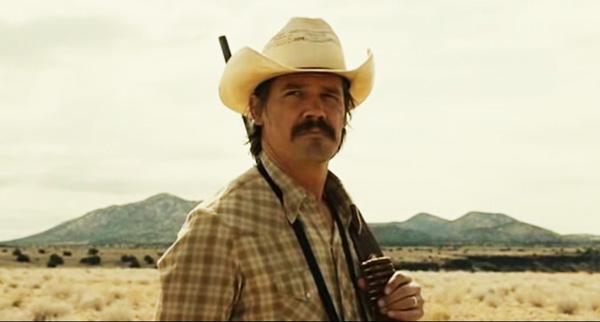 Film: Shaun of the Dead