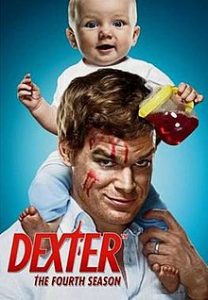 Dexter is one of my favorite shows running. Its fourth season may be the series’ strongest yet, thanks largely to the continued outstanding work of series stars Michael C. Hall and Jennifer Carpenter, and one of the most memorably terrifying villains of recent TV memory, from the Emmy-winning John Lithgow.

Dexter is an intense dark mystery about Dexter Morgan (Hall), a blood spatter analyst for Miami Metro Homicide who is covertly a brutal serial killer. Following a code laid out by his father (James Remar, a frequent “internal monologue” hallucination), Dexter — incapable of ignoring his homicidal impulses — channels his “dark passenger” by directing it against people even worse than he is. Over the course of the series, Dexter has built up a “cover” as a regular guy, revolving primarily around his long-term girlfriend Rita (Julie Benz) and work relationships centering around his mouthy, emotional sister Debra (Carpenter), a troubled but insightful homicide detective.

(Spoiler warning: although I do attempt to limit the details, it occurred to me after the fact that this review is inherently spoilery. Proceed with caution!)

The writers assist in Dexter’s likability by pitting him against villains even more monstrous and disturbing than he is, and season four’s Big Bad is the series’ best yet: Arthur Mitchell (Lithgow), the “Trinity Killer,” a monster of a man whose particular MO involves moving from city to city and murdering three people in succession, a pattern he’s repeated for thirty years. The search for Trinity comes to Miami, led by retired FBI agent Frank Lundy (Keith Carradine), a straight-and-narrow investigative lifer who was never able to sell the Trinity pattern to his superiors, and now pursues the case on his own time. Lundy brings his quest to Debra Morgan (who worked with him during a previous season), and Deb enthusiastically joins the chase, dragging the rest of the force in her wake. But Dexter, who has a unique insight into the workings of killers, stays one step ahead of them, identifying Mitchell early and bending the evidence in an effort to ensure Mitchell meets Dexter’s particular form of justice, rather than the law’s.

The devious trick of this show is the way it manages to make you root for Dexter, even as he carries out his appalling crimes year after year; the show endlessly poses interesting ethical questions about degrees of evil. Dexter is the Robin Hood of murderers, a horrible, vengeful man, but draped in a harmless, run-of-the-mill package. Hall — who might be my favorite TV actor of all time, based on this show and Six Feet Under — is consistently superb. He inhabits Dexter as an amiable, laconic, likable schmoe in his public guise, rarely betraying the submerged rage that drives his violent secret behavior. As a sustained series performance it’s a tour de force, an impressive tightrope walk of control and chaos that hasn’t faltered once in the four seasons I’ve seen.

That said, Hall is matched impressively throughout by Jennifer Carpenter, whose emotionally disturbed, spectacularly profane Deb Morgan serves as an essential counterweight to Dexter’s murderous, internal deadness. Deb wears her heart on her sleeve, a wiry, fearlessly confrontational train wreck with father issues, mad detective skills, and a perpetual chip on her shoulder. This unique sibling relationship is at the heart of Dexter’s rocky life journey, and it’s hard to imagine Dexter, the man or the show, getting along without Deb.

On a show filled with unnerving characters and situations, none can quite compare to Lithgow’s Arthur Mitchell, who effortlessly shifts from cheerful family man to murderous killer, traumatized victim of fate to cruel and heartless villain. The strength of season four’s overarching plot hinges almost entirely on solving the mystery of Mitchell: not just his crimes, but his psychological backstory, and the details of the “perfect” life he’s built up around his violent patterns, which Dexter can’t help but compare to the “cover story” of his own life with Rita and the kids. A character of Dexter’s singular formidability needs ever more challenging opponents, and Lithgow rises to the task impressively. (Also worth noting are the actors bringing to life Mitchell’s poor family — Julia Campbell, Brando Eaton, and Vanessa Marano — whose predicament lends even more urgency to Dexter’s mission.)

With the A story doing much heavy lifting, it doesn’t really matter that this season’s subplots tend to be less interesting. As ever, Deb leads the way here; her emotional struggles and behind-the-scenes investigation into her father’s past give Carpenter plenty of strong material. But there are some less than engaging side stories —  Lt. Laguerta (Lauren Velez) and Sgt. Battista (David Zayas) are saddled with an uninteresting relationship, Rita’s homelife puts her in the path of a potential infidelity, and Deb’s partner Joe Quinn (Desmond Harrington) gets clumsily involved with ambitious, trouble-making journalist Christine Hill (Courtney Ford). These side plots flesh out the world a bit, but none of them really strike gold, although Quinn continues to become an increasingly effective source of tension for Dexter. Meanwhile, the hilarious C.S. Lee is still in the fold as Dexter’s sleazy forensics colleague, Vince Masuka, providing essential comic relief.

Despite its minor weaknesses, this is easily the series’ most powerful and engaging season since the first. Dexter lives or dies on its central storyline, the performances of Hall and Carpenter, the formidability of its villain, and the thorniness of its ethical questions. On these points, season four hits it out of the park. Needless to say, I recommend the series in general and this season in particular. 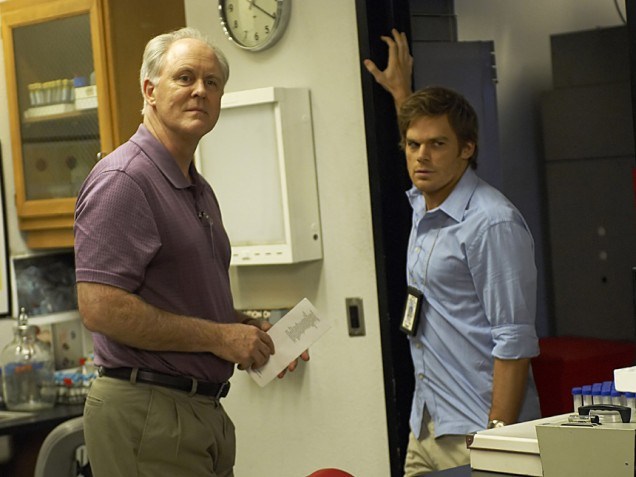