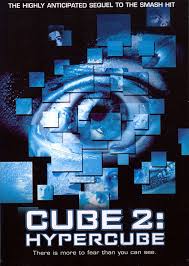 While I found Cube a conditional success at best, the concept was interesting enough at least to make me wonder what an inevitably inferior sequel might look like. Hence, more sickbed viewing in the form of Cube 2: Hypercube (2002), which I even managed to get all the way through, but only thanks to illness and boredom.

This one is basically Cube, with (heh) an added dimension. Eight strangers this time, all of them loosely connected, awaken in a better lit mysterious high-tech prison composed of fourteen-by-fourteen foot interlocking cubes, each with a door in the center. The inmates travel from cell to cell in search of an exit, but their journey is fraught with dangers both physical and temporal.

It’s basically a clunky spin on the original, minus the philosophical undertones and most of the originality. Remove the dim lighting, the colored sets, the eerie atmosphere, and the existential metaphor, then add sterile white set design, unimpressive CGI, a larger cast, and a government conspiracy back-story that awkwardly and badly explains everything. That’s Cube 2: Hypercube.

The only upgrade is the time element, which jazzes up this Mysterious Prison Construct 2.0 with potentially clever time travel-y switchbacks, as unpredictabilities in the space-time continuum thrust the characters into encounters with different versions of themselves and each other. Sadly, the potential isn’t realized; Christopher Nolan probably could have sneezed a neater structure for this film over his morning cup of coffee.

The acting is somewhat more polished than the original, with most of the cast emerging relatively unscathed from thin material, and Kari Matchett even coming off well. Even so, not enough positives to recommend this clunker. 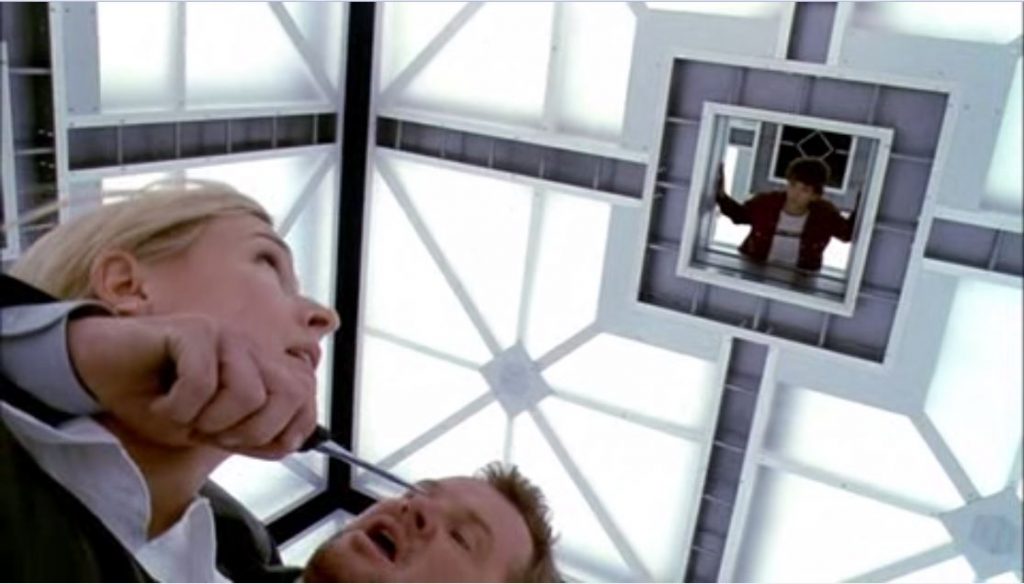