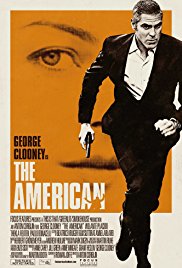 I love movies like The American (2010), international thrillers with brooding, paranoid spy protagonists. Sadly, I didn’t much care for The American itself, which doesn’t really deliver anything new to the genre.

George Clooney stars as Jack, an expert assassin-for-hire nearing the end of his career. His idyllic getaway in Sweden is smashed when hitmen show up, sending him further into hiding. His shady employer Pavel (Johan Leysen) bails him out and sets him up with another job, in a small mountain town in Italy, where he undertakes to build a custom sniper rifle for Mathilde (Thekla Reuten) and falls in love with a beautiful young prostitute named Clara (Violante Placido). Even as his paranoia mounts, he carries out this risky last assignment, hoping it will provide him with a soft landing as he leaves his lonely profession behind.

Artfully shot and impressively patient, The American starts strongly, building mystery early and sustaining it for a while as Jack moves southward across Europe, wordlessly assessing his situation. But for my money, it never pays off. Jack is your typical criminal-trying-to-get-out. Clara is your typical hooker-with-a-heart-of-gold. Pavel is your typical untrustworthy boss. The film doesn’t really jazz up these cliches enough to make them fresh, and the early questions lead to mostly expected, unsurprising answers. In the end, it’s a subdued, meticulous film, filled with gorgeous landscapes and gorgeous people, but the story is a major disappointment, the film’s early promise unfulfilled.