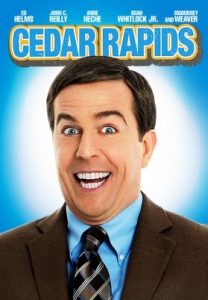 Cedar Rapids (2011) lured me with its cast and its setting: Iowa, my former stomping grounds. It’s an agreeable enough formula comedy, marred by occasionally ugly writing but rescued by key performances.

Tim Lippe (Ed Helms) is an ultra-naïve, small-town insurance salesman, who finds himself sent to a convention in Cedar Rapids as a last-minute replacement. His job is to represent the company at an awards presentation. The straighest of straight shooters, Lippe is a simple and tragically lawful fellow who wants nothing more than to marry his childhood schoolteacher Macy (Sigourney Weaver) and sell insurance in Brown Valley, Wisconsin. But the corrupting influences of the “Big City,” and pressure to succeed from his ambitious boss Bill Krogstad (Stephen Root), lead him down a treacherous moral path — and the adventure of a lifetime.

Cedar Rapids has all the earmarks of a winning fish-out-of-water comedy, anchored by Helms’ clever central performance as a square so inexperienced that even a midwestern hotel convention feels like a sinful den of iniquity. Its off-the-beaten-track focus on Iowa and the insurance industry makes for a uniquely amusing milieu, and the performances are ingratiating, particularly Isiah Whitlock, Jr. as Lippe’s kindred spirit roommate, and Anne Heche as his adorable firecracker of a love interest, Joan Ostrowski-Fox.

There are glitchy flaws throughout, and some weird casting — Alia Shawkat as a crack-smoking prostitute, anyone? — but the chief drawback (amazingly) is John C. Reilly. His character, Dean Ziegler, is your standard asshole-with-a-heart-of-gold, who spends much of the film spewing smutty jokes and misogyny. Clearly conceived as the anti-Lippe, Ziegler certainly fulfills a story need, a catalyst for Lippe’s change. But his appalling lowest-common-denominator jokes (alarmingly funny to the majority of the audience, alas) crossed the line for me. Even after Lippe and the rest of the heroes have accepted him in “boys-will-be-boys” fashion — even Joan, whose character seems too smart for that shit — I found him beyond redemption.

Setting that aside, Cedar Rapids does have redeeming elements. It may be far too forgiving of Ziegler, but in general it comes down on the side of good. Helms, Heche, and Whitlock deliver nerdy heroics, while Root and Kurtwood Smith provide effective money-grubbing villainy. I wish it hadn’t celebrated drunken assholery so much, and it’s no masterpiece, but it’s an amusing, confident farce that pushed welcome nostalgia buttons for me. 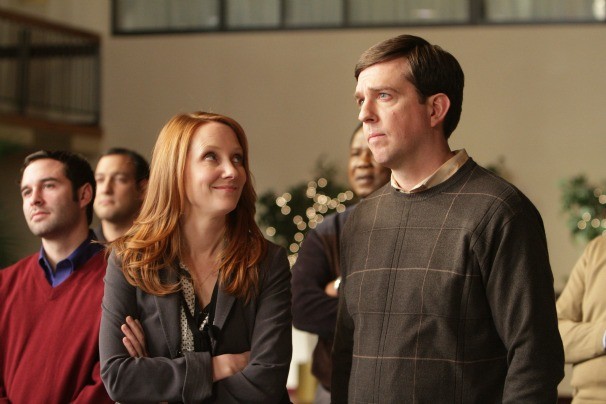