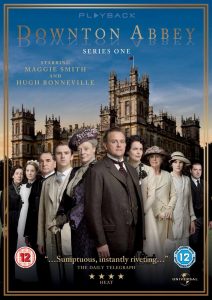 If you’d pointed me at this show five years ago, I probably would have bounced off it. But I’ve gotten better at venturing out of my comfort zone, and I really enjoyed Downton Abbey, a seven-episode series examining the class divide in a British country manor circa 1913-14.

The Downton estate, inhabited by the Crawley family, is in jeopardy of being lost due to the lack of a male heir. The Earl of Grantham, Robert Crawley (Hugh Bonneville), and his American wife Cora (Elizabeth McGovern) have three daughters, but the death of a cousin presumed to be the logical suitor for eldest daughter Mary (Michelle Dockery) has cast the future of the estate into doubt. Enter distant cousin Matthew Crawley (Dan Stevens), a lawyer from Manchester, who is disdainful of aristocratic ways but allows himself to be lured into the inheritance drama as a potential, if unlikely, marriage prospect for Mary.

Behind the scenes, the servants of the Downton estate have their own squabbles and intrigues. Central to the conflict is the arrival of new valet John Bates (Brendan Coyle), a Boer War companion of the Earl’s. Bates’ crippling war wounds threaten his ability to do the work, and he becomes an enemy of ambitious footman Thomas (Rob James-Collier) and spiteful maid Sarah O’Brien (Siobhan Finneran), whose villainous schemes provide plenty of conflict in the house.

The show deftly deploys its vast cast of characters, forcing the privileged family and servile underclass into ever-more-interesting interactions, which run the gamut from melodramatic to comedic to moving. It’s a vast period soap opera, with much of the conflict driven by the times: the clash of societal expectations with the desires of the individual, on both sides of the divide. The romantic entanglements and the family’s legal dilemma keep the atmosphere strained, but it’s not all doom and gloom. Lightening things up is Maggie Smith as the Dowager Countess of Grantham, whose stodgy ways meet new challenges from Matthew’s progressive mother Isobel (Penelope Wilton). Their contentious bickering provides welcome comic relief.

Most interesting to me, though, was the history. The show delivers snatches of the broader world political backdrop, punctuated by references to major events of the era, as well as more close-in detail on the day-to-day living of the time. (The characters’ varied reactions to period technological changes — electricity, telephones, automobiles — make for an amusing glimpse of early 20th century future shock.) Meanwhile, the house serves as a microcosm of an unjust caste system in the early stages of a gradual breakdown, painting an interesting portrait of bygone ways and incremental changes in sociopolitical  thinking. This is embodied best perhaps by the youngest Crawley daughter, Lady Sybil (Jessica Brown-Findlay), an advocate for women’s rights who befriends the Earl’s leftist chaffeur Branson (Allen Leech) and becomes a source of support for young maid Gwen (Rose Leslie), who is looking to better herself in life. Thematically, the show is actually similar to Mad Men in its focus on the societal structures and gender politics of a past era (although it’s wildly dissimilar stylistically).

Downton Abbey isn’t at all my kind of thing,  except in that it is, a rich, engaging, interesting, funny and moving series. I’m looking forward to the second season.