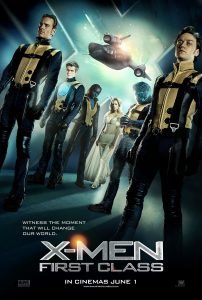 For the most part, X-Men: First Class (2011) leaves the original trilogy in the dust.  I enjoyed it quite a bit, moreso than most of the recent spate of comic book reboot films.  Unfortunately my enjoyment was tempered considerably by a distractingly glaring  flaw — it handles its female characters abysmally.

As in the original trilogy, this one is largely dominated by two major personalities:  Professor Charles Xavier (James McAvoy), a deeply intelligent telepath from a wealthy background, and Erik Lehnsherr (Michael Fassbender), the survivor of a Nazi concentration camp who possesses vast magnetic powers.  The paths of these two men converge in the 1960s, when Xavier is recruited by CIA agent Moira McTaggert (Rose Byrne) to help the US government face the threat posed by Sebastian Shaw (Kevin Bacon) — who happens to be the man who “helped” Erik develop his magnetic powers.  Along with Charles’ childhood friend Raven (Jennifer Lawrence), soon to be known as Mystique, Charles and Erik help to build the early X-Men, set against a swinging ‘sixties, Cold War backdrop.  But the friendship of these two powerful men grows strained under fire, as their views differ greatly as to whether mutantkind can peacefully coexist with humanity.

As even this brief summary will attest, the comic book lore has been mutated in the adaptation, which is SOP for this kind of reboot.  If that doesn’t bother you, it makes for a compelling origin story, at its strongest during the recruitment phase, as the “first class” comes together.  One of the film’s toughest challenges had to be re-casting Professor X and Magneto, but I think James McAvoy and especially Michael Fassbender are both home runs, recapturing the spirits of their respective characters.  Another major challenge was probably finding a villain formidable enough to take them on, and they succeed again with Sebastian Shaw; Kevin Bacon is terrific here.

The film’s middle stretch, wherein the “original” X-Men class (again, severe lore mutation alert) is recruited and trained, is probably the most fun.  This sequence entertainingly mashes up character introductions and period detail, giving the film an interesting “secret history” feel.  The casting is hit or miss with these younger recruits.  Jennifer Lawrence is a good actress in the wrong role as Mystique, Nicholas Hoult makes an adequate but unspectacular Beast, and the film’s rather unfortunate attempts at racial diversity, Angel (Zoe Kravitz) and Darwin (Edi Gathegi), are underdeveloped and negligibly involved.  I was rather fond of Caleb Landry Jones as Banshee, and Lucas Till is fine as the jerky Havoc — two somewhat more obscure Marvel figures, who perhaps didn’t have as much to live up to.

All this said, sadly the film is pretty much a travesty for women.  Every female character in the movie is marginalized, objectified, sexualized, or simply put in their place by the more active, dominating men.  Mystique utterly lacks edge, portrayed as a lovelorn kid obsessed with her looks.  Her side-switching  transformation could have been the powerful thematic arc of the film, but the film doesn’t really care about her thoughts; it’s all about Charles and Erik, and how their charismatic arguments motivate her.  Moira McTaggert (Rose Byrne) comes off as gutsy, intelligent and independent for a while, only to be submarined brutally by the script as the film winds down.  (The way her CIA boss dismisses her with “comical” misogyny, in the wake of a “womanly moment,” is a lowpoint.)  Meanwhile, the villainous Emma Frost is given no life or formidability whatsoever by the vacant January Jones.  And Angel, who begins her rebooted version as a stripper, is hardly worth mentioning.  You’d think nobody on the film’s creative team has ever met any women.  (Seriously, there are stronger female characters on your average episode of The Rockford Files, and that was over thirty years ago!)