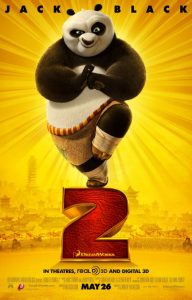 I enjoyed the first Kung Fu Panda more than I expected when it came out, so this weekend we hit the sequel. Kung Fu Panda 2 (2011) pits Po (voiced by Jack Black) and the Furious Five against Shen (Gary Oldman), a villainous peacock whose arsenal of technological weaponry subdues a great city and threatens to “destroy kung fu.” At the same time, Po begins to question his forgotten youth, and seeks to uncover the mysteries of his past even as he and his team are taking on the latest Big Bad.

I just want to take a moment to reflect on the phrase “villainous peacock.”

Kung Fu Panda 2 is beautifully animated, effectively voice acted, and generally entertaining. It opens a bit slowly and there are a handful of slow spots, but by and large it’s an enjoyable big budget entertainment. I expect fans of the first one will get a kick out of the sequel.