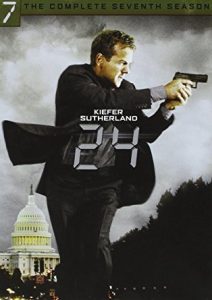 After the disaster of the previous season, I’m happy to report that the seventh outing for 24 was a considerable improvement.  Oh, it’s still late-run 24, rife with preposterous turns, familiar ideas and time-filling subplots — and in general the shine’s been off the apple since its groundbreaking early days.  But it’s much more engrossing and fun than season six, easily the show’s nadir.

This season takes us to Washington, D.C., where indestructible crisis-aversion machine Jack Bauer (Kiefer Sutherland) is finally answering for his behavior at a congressional hearing.  Bauer is pulled from the hearing by FBI agent Renee Walker (Annie Wersching) when a threat to the nation’s computer infrastructure develops and it turns out an old friend-slash-enemy of Bauer’s is involved.  Spearheading the threat is Colonel Ike Dubaku (of 24: Redemption), who is using the threat to stave off the invasion of his homeland, Sangala, where his genocidal regime has drawn the ire of hawkish U.S. President Allison Taylor (Cherry Jones).  Bauer joins forces with the FBI — and, of course, later goes against them — as the threat continues to mutate, a revolving door of villains both mercenary and ideological upping the stakes from hour to hour.

On the plus side, season seven mercifully dismantles CTU, moves the show out of its familiar, overplayed Los Angeles backdrop, and opens strongly with a compelling conspiracy narrative that pits a small, independent team against the entirety of the US government. The crisis center this time is the FBI, which features some engaging, well played interactions from new cast members Wersching, Jeffrey Nordling, Rhys Coiro, and Janeane Garofalo.  And the season also features Jon Voight in one of the series’ more memorable villain roles, as the wonderfully cracked Jonas Hodges.

On the other hand, like other recent seasons the show feels pretty shopworn.  The logistical strain of its premise forces the plot through multiple reinventing contortions as threads reach their natural end points with too many episodes to spare.  The more I think about it, the more improbable 24′s eight-season run is:  the idea that it came off once is pretty amazing, in light of the complexity of the project, but eight times?  When you think of it that way, the show gets kudos for even remotely tying things together, even in its worst years.  Filled with rehashed ideas and themes, and maintaining the series’ track record of weirdly being both right and left wing simultaneously, season seven is probably another For Completists Only year — not among the series’ best, but hardly among its worst.  And the first ten or eleven episodes are particularly solid, with occasional moments of the old magic, before the strains of a long season start to show themselves. 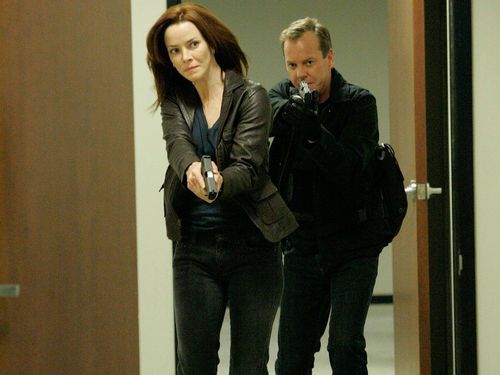