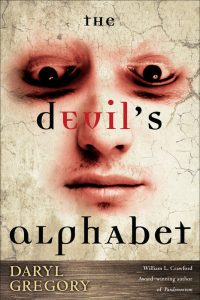 Easily among the most unique genre novels I’ve read in a while, Daryl Gregory’s The Devil’s Alphabet (2009) defies easy categorization.  This one blends elements of contemporary fantasy, horror, and science fiction into an unconventional southern stew that’s weird, clever, and ultimately powerful.

The story begins as Paxton Martin returns to his hometown of Switchcreek, Tennessee, which in his youth was the site of a bizarre, unexplained outbreak of a disease called Transcription Divergence Syndrome.  This phenomenon, which killed many, transformed most of the survivors into odd, mutated new strains of humanity.   The “argos” are enormous, powerful giants; the “betas” have become plump and hairless breeders who reproduce parthenogenetically; and the overweight “charlies” have ballooned to massive sizes.  Pax, a “skip” unaffected by the outbreak, escaped the weird dramas of Switchcreek to a simple but aimless life in Chicago.  But the death of a close friend draws him back to Switchcreek to confront his past.  This includes considerable soul-searching:  mending a fractured relationship with his charlie father, renewing acquaintance with a close childhood friend who became an argo, and generally coming to terms with his bizarre upbringing.  But Pax’s personal dilemmas are also driven by the town’s larger mysteries, as he investigates the curious circumstances behind his friend’s suicide, uncovers the shady dealings of the town mayor, and gradually becomes more invested in the fascinating scientific mystery at the heart of the town.

The Devil’s Alphabet snuck up on me.  It opens quietly with a subtly warped atmosphere, depicting a contemporary rural community wracked by inexplicable oddness.  But gradually it escalates into a larger story, a confidently executed SFnal mystery commenting on prejudice, survival ethics, and coping with otherness.  Pax is a somewhat disaffected but likeable protagonist whose personal journey — struggling with the baggage of his past, and trying to chart a path forward in life — is informed by the science fictional underpinnings of the world.  It’s a distinct and effective work, full of inventive twists, quirky characters, and heartfelt themes.  I went into it this one mildly intrigued, but left it thoroughly satisfied.