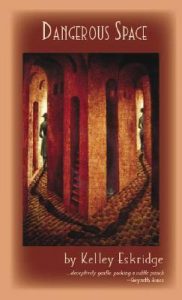 Since I started reviewing for this blog, I’m finding I tend to read novels for story-telling and voice, while anthologies are about ideas, variety, and finding new authors. With single-author collections, more and more it seems to be about technique and style, and it’s while reading them that I have the hardest time turning off my “writer brain.” Seeing an author’s approach to several different ideas tends to be more instructive to me than any other kind of reading, when it comes to contemplating the craft of writing fiction.

Which leads me to Kelley Eskridge’s Dangerous Space (2007), a short collection of interstitial genre stories of considerable immediacy and power. These stories bring the reader in tight to the action for close-angle viewpoints, very much about individuals connecting in dramatic circumstances. My predisposition tends to be to step back and take a wider lens, bigger picture look. Dangerous Space doesn’t afford that opportunity, and gave me some new perspective on how the opposite approach can be effective.

For me, this “in-tight” technique works better at longer lengths, I believe, when the story provides ample time to burrow ever more deeply into the characters’ minds and the language of the piece. I say this partly because the only story that didn’t really connect with me here was the shortest, “Somewhere Down the Diamondback Road,” a style-heavy road story that didn’t leave a deep impression.

I also say it because the longer stories — like Eskridge’s fantastic novel, Solitaire — really worked for me. Of particular note are two stories that seem to be key: “Eye of the Storm” and the title novella, “Dangerous Space.” “Eye of the Storm” is outwardly a secondary world fantasy about a mercenary, Mars, who develops a risky and effective new form of combat called stormfighting with three companions who become his soulmates. “Dangerous Space” takes us to a contemporary music world, where the protagonist — also named Mars — takes a job steering the career of an under-the-radar, indie rock group called Noir, and falls for the band’s enigmatic lead singer. Both of these stories took some getting into in their opening pages, but then built impressively with increasingly interesting themes and immersive prose. Despite the distinctly different worlds, these struck me as companion pieces, and not just because they both manage the unique trick of not identifying the gender of their protagonist, which isn’t nearly as disorienting as you might think. The former examines the relationship between sex and violence, the latter between sex and music. As such, they’re both stories that reflect on immediacy, fascinated by consuming, in-the-moment experiences.

The themes of these stories — relationships, art, immediacy of experience, examinations of gender — recur throughout the rest of the collection. I particularly enjoyed “Strings,” a powerful and satisfying tale of a highly regulated world where musicians struggle to connect through artistic expression, and “Alien Jane,” which examines another consuming, in-the-moment sensation — pain — and what its absence can mean. The worlds of all the stories are diverse, often wildly different. But there is a similarity of technique and interest throughout that is distinct, bringing the reader in close to experience the characters’ cares and concerns all the more intensely. This isn’t my usual thing, really, but I think I’m more open to the approach now than I was before. A highly satisfying collection.

Novel: Spies of the Balkans by Alan Furst