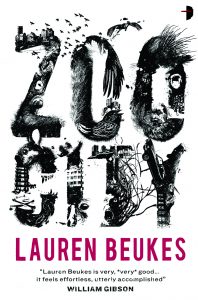 Shifting gears somewhat after her superb SF debut Moxyland, Lauren Beukes’ next stop is Zoo City (2010), a colorful urban fantasy/mystery. Here she shifts from multi-protagonist to single viewpoint, and from a world transformed by rapid-fire progress to one transformed by dark magics. The result didn’t zing along quite as impressively for me as its predecessor, but it’s still distinctively Beukesian, filled with attitude and invention, and I came away satisfied.

The backdrop is Johannesburg, South Africa, this time altered by a plague of magic that mysteriously saddles criminals with unshakeable animal familiars, and subtle powers. Zinzi December is one of the “animalled,” her sloth companion a constant reminder of a regrettable incident of her past. From her apartment in “Zoo City,” an edgy neighborhood where most of the animalled live, Zinzi scrapes by as kind of low-grade, cosmic PI with a magical knack for finding lost objects. Her abilities get her on the radar of a powerful music industry executive, who enlists her to locate the missing half of a teen pop duo. Reluctant to take on missing persons work but handcuffed by crippling debt, Zinzi takes to the streets in search of the quarry — not recognizing the dark, dangerous path she’s treading.

I love Beukes’ colorful prose style and world-building, and Zoo City is another great showcase for them, each page packed with clever turns of phrase and vivid, unique descriptions. Zinzi makes for a compelling anti-hero, and I love the collision of noir mystery and urban fantasy sensibilities here. I found the plot rambly and occasionally hard to follow; it lacks Moxyland’s structural polish, perhaps. But it’s otherwise satisfying, memorable stuff, and I’m definitely excited to see where Beukes goes next.