Hmm, it’s been a little quiet around these parts lately, eh? I’ve been on a bit of an extended break, for a variety of reasons, including the fact that some joker hijacked my homepage recently. Jenn identified the vulnerability and restored everything, but in the process I ended up with a new website theme. What do you think?

I’m also now officially between novels, so I’m catching my breath before gearing up for a November push on my next project, Rogue Souls. The outline is complete and I even have early pages. I probably won’t finish it in a month, but I’m hoping that NaNoWriMo solidarity will help me get a good jump-start on it.

Finally, it was my birthday recently; not only that, but “the big one.” Yep, I’m forty years old! For the record, I don’t feel forty; totally still feel like a kid. Which may be because I was already pretty cynical when I was a kid. Or, maybe it’s the cool Hawkeye T-shirt Jenn bought me: 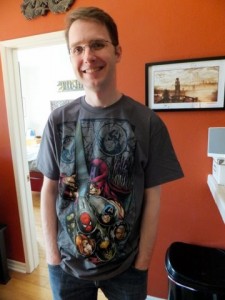 So the past week has been pretty relaxed here in my world: a long weekend, some nice meals, watching Sabres and Kings games to start the new hockey season, relaxing, gaming (reviews coming), and getting ready for a new project. I’ve even taken advantage of the downtime to work on a new Garage Band tune, something I haven’t made time for in a while.

It was a nice break, but I’m starting to feel the itch to move on to the next project, so I expect I’ll be ramping up my productivity again soon. Thanks for all the birthday well wishes on Facebook!