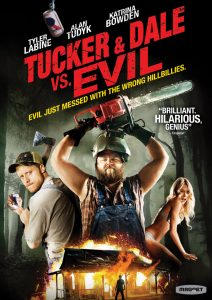 Tucker & Dale vs. Evil (2010) is a nutty, energetic diversion that sustains a simple, trope-bending conceit into a fun, silly film. The set-up is a cliché right out of the Horror Movie Handbook: a group of partying college kids, ring-led by aggressive asshat Chad (Jesse Moss), venture into the West Virginia woods on a camping trip. On their way, much to their alarm, they encounter a pair of beer-guzzling hillbillies, Tucker (Alan Tudyk) and Dale (Tyler Labine), who, beneath their creepy outward appearance, are simply having a vacation of their own. When Ally (30 Rock’s Katrina Bowden) takes a spill into the water during a midnight swim, she’s rescued by Tucker and Dale, who are innocently night-fishing. But Ally’s friends, creeped out by Chad’s horror stories and certain preconceived notions, mistake it for an abduction and assume the harmlessly vacationing hicks are murderous psychopaths.

Obviously, this one is not high art. But in light of its one-note premise, it’s surprisingly enjoyable, better than it should be. This is largely thanks to Tudyk and Labine, who humanize traditionally vilified characters and bring great comic timing to their roles. The script works clever twists on obvious horror-movie clichés, and while the dialogue doesn’t always zing, the performers never falter. Unfortunately, the pace does flag from time to time, and the cannon fodder campers don’t bring that much to the table — Bowden is a cut above the rest. But overall it’s a goofy, engaging romp for horror fans, and I got a kick out of it. 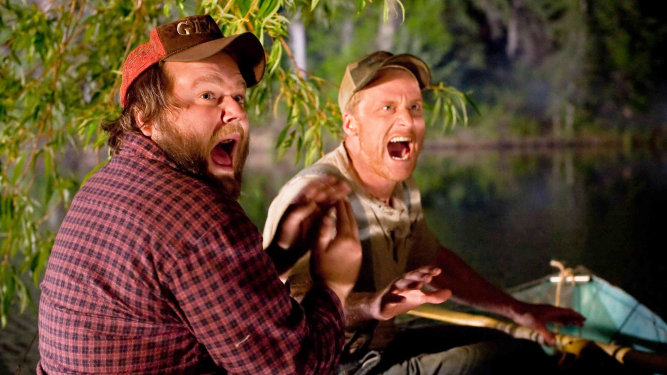 Novel: How the Dead Dream by Lydia Millet