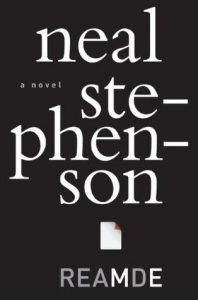 Many years ago, Neal Stephenson catapulted onto my A list with the mind-blowing Snow Crash. He held me for a while with The Diamond Age and the brilliant Cryptonomicon, but I got bogged down in volume one of the Baroque Cycle, missed Anathem, and watched him fall off my radar.

REAMDE (2011) is clearly the novel designed to win people like me back to Stephenson’s work. It’s a monster-sized (1,044 pages) near-future international thriller involving MMORPGs, spies, mobsters, hackers, and terrorists. How could I resist a cocktail made up of these ingredients? I didn’t, of course; went right for it!

To say this novel “stars” any particular character is too simplistic, but Stephenson does have two anchor protagonists. Richard Forthrast is an entrepreneur with a shady past, whose business acumen helped him build a huge video game empire based around his massive multiplayer online RPG, T’Rain (which is basically a more intense, next-generation World of Warcraft). His niece is the adopted Zula Forthrast, an Eritrean refugee with a knack for computers and, as it turns out, a nose for trouble. The two of them are together at Richard’s British Columbia ski lodge when the adventure begins: Zula’s shifty boyfriend Peter secretly sells stolen credit card numbers to an angling, criminal middle man named Wallace, in the process passing on a T’Rain-targeting virus (called REAMDE) to Wallace’s computer. This simple “ransomware” attack results in massive complications for Wallace and his criminal connections, and Zula and Peter are kidnapped to resolve them, kicking off an unlikely international adventure. Meanwhile, Richard — busy dealing with the ramifications of the REAMDE virus — eventually learns of Zula’s disappearance and begins leveraging his vast resources to save her.

That little summary sounds simple enough, but this is Stephenson, and he layers plots, subplots, and sub-subplots atop this framework, ricocheting backwards and forwards in time to connect all the Machiavellian dots. Along the way he introduces other viewpoint characters, all of whom become integral. There’s Csongor, a burly Hungarian hacker; Sokolov, a Russian mercenary; Yuxia, a Chinese street hustler; Olivia, a British MI6 agent; Marlon, the creator of the REAMDE ransomware virus; and more. What begins as a mad but straightforward kidnapping escalates insanely into a globe-trotting entanglement with Middle Eastern jihadists.

Make no mistake, the plot of REAMDE is preposterous. It’s a dense tangle of contrived coincidence, bad luck, balls-to-the-wall heroism, and often illogical decision-making. But, weirdly, that makes it no less a tour de force of impressive craftsmanship, a madly complicated skein of narrative threads that sing along individually, occasionally intersecting and colliding, ultimately to come together in a stirring, crazy finale. It’s the literary equivalent of juggling flaming chainsaws; even when he stumbles, it’s enough that Stephenson keeps them all airborne. And while from time to time the A-to-B machinations of the plot read like so much logistics, it still manages to cohere, and the ultra-violent, action-thriller ride remains engaging throughout.

I think the main reason it all holds together is character. Stephenson presents a vast and diverse international roster, distinctive and likable figures he clearly cares about, and it shows. Most of them are badasses in their field of choice, and it’s great fun following each of them through the maze of calamities and interactions, forming attractions and allegiances and rivalries as the novel progresses. It was this aspect which elevated the book above my dazed first impression: a hard-R season of 24, written and directed by Quentin Tarantino. There’s more to it, in other words, than flashy eyeball kicks, frenetic action, and impressive command of form. Beneath the wild, rickety rollercoaster is heart, and people I came to care about, which made the story resonate despite the unlikely twists and turns.

REAMDE will repel some readers, who won’t get past the contrivances and the infodumps, and who might not be as interested in Stephenson’s ideas as he is himself. But I rolled with it, and blazed right through the adventure, and had a great time with it.

Back to the Schedule