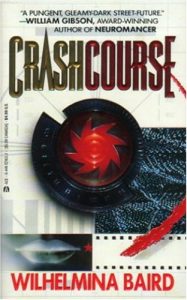 Wilhelmina Baird’s Crashcourse (1993) is a gritty, energetic cyberpunk adventure I wish I’d discovered at the time of release; I suspect the author would have become a favorite. Even now it holds up pretty well, a grungy futuristic crime novel that whips along engagingly while riffing thoughtfully on class, gender, and the media.

Cassandra Blaine is a high-tech thief, a member of the “Ump” (unemployed) class in this future’s rigidly stratified caste system. Cass shares a loft with her two male life partners: Dosh, a handsome prostitute, and Moke, a struggling artist. The three of them share a loving but hardscrabble existence, and they all desire escape: a chance to graduate from their caste, get off-planet and start a new life. The chance comes in the form of a movie contract, which in this future involves signing over your life to secret surveillance which will eventually be cut into entertainment for the bored, wealthy “Ari” class, who directly experience the emotions and perceptions of the film’s characters. The trio enters into this dangerous contract, not knowing when the film will start or what the script has in store for them, all  in the hopes that they’ll survive the story long enough to make their fortune.

Baird’s prose is full of jargony attitude, and there’s a compelling energy to it, even as the world-building occasionally feels muddy, style blurring substance. That said, the substance is interesting, and the central, intrusive-media premise is a few steps ahead of reality. (Wasn’t The Real World still in diapers back when this book was released?) Baird’s thematic examination of class divides, gender roles, and the media probably feels a little less science fictional now than it did at the time, but that’s a testament to its prescience, and it’s no less relevant for it.  It’s The 10th Victim by way of Neuromancer, a neat combination in my book. It makes for a quick, edgy read.