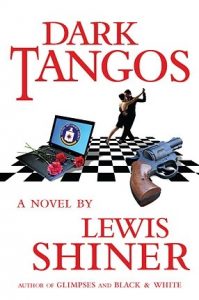 Dark Tangos (2011) takes us on a rare visit to South America for a striking political thriller set in Buenos Aires. Rob “Beto” Cavenaugh is a software programmer who relocates to his multionational employer’s Argentina office, in the wake of a crumbling marriage and a plummeting US economy. Beto’s lonely expatriate existence is made bearable by his love of the old city — and his love of tango, which he studies devoutly and practices as often as he can in the city’s lively dance halls. A stranger in a strange land, Beto’s connection to his environment heats up when he meets, and falls in love with, the gorgeous, much younger Elena – who, much to his surprise, reciprocates his interest. But Elena has a complicated past, and Beto soon finds his relationship with her entangling him in a dangerous secret war that reaches back into the country’s dark, turbulent history.

Dark Tangos is a brisk, vivid book, opening like a classic, technicolor Hitchcock thriller before it takes several surprising, more contemporary turns. I enjoyed its lush descriptions and nicely drawn cast of characters, and the plot is well clocked and satisfying. The unfamiliar territory and South American history was also refreshing. Alas, while the central romance was certainly credible, I felt it drifted into melodrama and wish fulfillment at times. And I thought an opportunity was missed for a perfect ending: I could see it coming, but it didn’t quite arrive. But in the end those feel like minor complaints, held up against what is otherwise a thoroughly enjoyable and often powerful novel. Recommended.