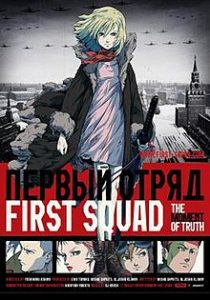 First Squad (2009) is an interesting, if not entirely satisfying, Russian-produced anime film layering an occult secret history over World War II.  The story involves Nadya, a young girl with precognitive powers who emerges from a traumatic, amnesia-causing shelling to learn that she’s actually an important field agent for Russian military intelligence, a group called Division Six.  Nadya is enlisted to rescue her deceased teammates from the afterlife, in order to combat a German plan to stop the Russian counteroffensive — by unleashing waves of undead against the Red Army.

Boasting solid animation, impressive scenery, and some inventive story ideas, First Squad is ultimately a little too disjointed to fully satisfy.  It stumbles about in search of a point of attack early on, and frequently interrupts the flow with jarring mock interviews with live-action “veterans” and “historians” of the secret conflict.   The combination of WWII history and eery occult atmosphere is often effective — it’s almost an anime, Eastern Front counterpart to Ian Tregillis’ Milkweed series — but I lost patience with the narrative early on and ultimately came away disappointed.