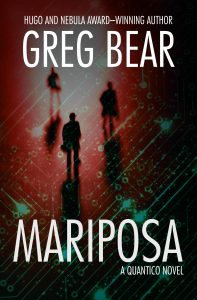 Greg Bear’s Mariposa (2009) re-gathers the cast of Quantico, pushes them deeper into the future, and entangles them in a skein of desperate operations to save the United States from the brink of total collapse. While structurally and conceptually more ambitious than its predecessor, I found it a somewhat tougher read. But after a disjointed first half, the book redeems itself with an exciting, action-filled resolution.

As the novel opens, the political climate in the U.S. has undergone drastic changes: the FBI has splintered into two sub-organizations, the U.S. government is on the verge of bankruptcy, and the country is fragmenting as states seek secession from an increasingly weak federal core. The heroes are just as scattered. Rebecca Rose, on leave from the Bureau, attends a security tech conference in Los Angeles; William Griffin travels to Boise to investigate a scientist who’s in the back pocket of a Texas private security magnate named Axel Price; and Fouad al-Hasam is working undercover, gathering intelligence on Price’s empire. All three agents embark on separate missions, destined to collide in Texas, where a devious plan of revolution threatens to shatter the United States and change the world.

There are a lot of disparate plot threads in this one: an investigation into a shocking, high-profile murder, the disappearance of a scientist, the rescue of a child unjustly sentenced to death in an accidental shooting, and Mariposa, a groundbreaking treatment for post-traumatic stress disorder that has unexpected side effects. Bear juggles all these tracks, and peppers the story with scads of interesting scientific, technological, and political speculation. It feels haphazard at first, and I found myself in the curious position of loving the ingredients without quite enjoying the dish. But Bear admirably brings all his threads together, and the novel accelerates down the back stretch excitingly. For me, then, the overall execution was uneven, but the subject matter — particularly at the big picture level — was fascinating, and I came away hoping to see more of this world.