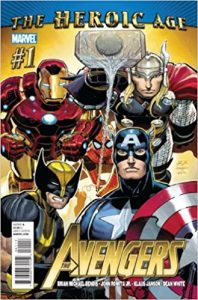 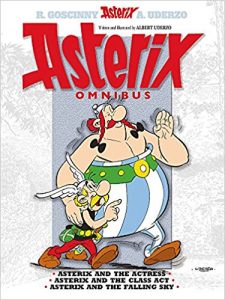 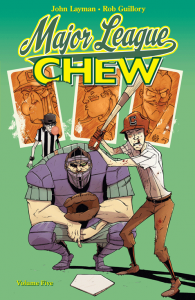 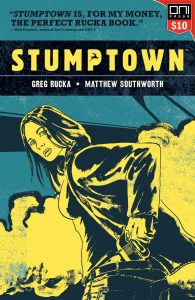 Recently Jenn was out of town, and one bored and miserable Friday, to lift my mood and in anticipation of seeing The Avengers, I decided to check out this comic book shop up in Northridge that we often drive past but never visit. I came out loaded down with goodies, and I’ve already been back once; I’ve decided that hey, if I’m lucky enough to live in a city with an actual brick-and-mortar comic shop, I should probably do my duty and shop there!

I drifted away from comics in the 1980s, and since then I’ve found the barrier to re-entry daunting, especially in my primary stomping grounds, the Marvel universe. But I was craving Avengers, so I started my stack with two volumes of the Heroic Age The Avengers rebranding by Brian Michael Bendis and John Romita, Jr. I have to say that while I quite liked the artwork in this sequence, I was rather underwhelmed by the story, which struck me as an exercise in logistics, complicatedly maneuvering scads of new and old Avengers into different alignments. It was tough to find the story through all the personnel, and accommodating so many characters gives all of them short shrift, particularly lone wolves like Spider-Man and Wolverine, who feel like fish out of water here. A somewhat disappointing reintroduction to the team Avengers books, for me.

For more nostalgia, I scooped up an Asterix omnibus containing three full volumes of the classic French series about a small village of superpowered Gauls holding out against the Roman Empire. I collected the Asterix books as a kid and while they don’t hold the same power over me now, I definitely enjoyed revisiting them. “Asterix and the Actress” is a fun, classic Asterix story, but the real treat here is “Asterix and the Class Act,” a grouping of short oddities and rarities from over the years. The closing tale, “Asterix and the Falling Sky,” is a disappointment, breaking the spell of its universe by introducing aliens and modern science fiction tropes to the Asterix universe. Probably not the best Asterix omnibus — I picked it up because I hadn’t read these titles — but still full of goofy wordplay and playful artwork.

Speaking of playful artwork, my favorite new series continue to be Chew, and its fifth volume, “Major League Chew,” continues an impressive track record of unique, demented invention as it follows the adventures of cibopathic detective Tony Chu, who solves crimes by eating the evidence. Where else can you have agents of the USDA partnered with lions, a psychotic plot to write a tell-all book about the sex lives of dead baseball players, villains with the ability to carve chocolate into fully functional weapons, and more! This is such a delightfully bizarre series, and shows no signs of running out of ideas.

Finally, craving something self-contained, I picked up Greg Rucka’s Stumptown, a modern day P.I. story that does for The Rockford Files what his brilliant Queen & Country series does for The Sandbaggers. (Could this guy be any more in my wheelhouse?) Stumptown’s hard-luck hero is Dex Parios, who takes on a missing persons case from a casino owner in order to dig out from gambling debt. Dex’s innocent search leads her into the path of nefarious underworld types as she combs the streets of Portland, Oregon. Rucka’s story-telling chops are a cut above the comptetition, and I found Stumptown a smooth, enjoyable read that will probably resonate with fans of blue collar PI shows like Rockford and Terriers. I wish I had enjoyed the art more — it’s not really my style — but the narrative more than made up for it. As with Queen & Country, I came away wanting more, and wishing it were a TV series.