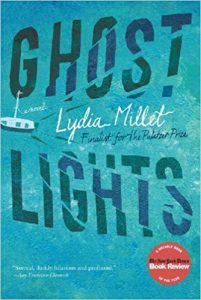 Man, can Lydia Millet ever write.  Ghost Lights (2011) is the sequel to her brilliant novel How the Dead Dream, and continues to explore that book’s sociopolitical themes.  The protagonist this time is Hal Lindley, an IRS paper-pusher who’s ambling into midlife.  Hal’s wife Susan is devoted to her employer, T. (the hero of How the Dead Dream), who has mysteriously vanished in Central America.  Hal, a shadow of his former self since an accident rendered his daughter a quadriplegic, is pushed further over the edge when he learns his wife is having an affair.  In an act of desperate spontaneity, he decides to go to Belize to spearhead the search for the missing T., wresting himself out of his comfortable bureacratic routine to take in a new world.  In the process he opens himself up, for the first time, to startling new personal discoveries.

Like How the Dead Dream, Ghost Lights is beautifully written, insightful, and wickedly funny at times, and it too is a thoughtful critique of distinctly American attitudes about capitalism,  consumerism, and the relationship between humankind and nature.  Where the focus of How the Dead Dream was on the environment, however, Ghost Lights seems to have a broader target:  individual complicity in unjust systems, with Hal the somnambulant everyman,  oblivious to his slumber.  As a sequel, it perhaps lacks the freshness and originality of its predecessor, and the midlife crisis plot advancement almost feels shopworn.  But Millet handles her material with such skill and sensitivity that it really doesn’t matter, and ultimately the book resonates.  Another fast, funny and thought-provoking read.