Non-Fiction: The Life and Mysterious Death of Ian Mackintosh by Robert G. Folsom 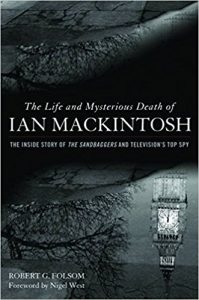 I’ve made no secret of my love for the classic British spy drama The Sandbaggers, an intelligent, powerful 20-episode series that examines the political battles and ethical conundrums of the espionage world.  The show isn’t terribly well known these days, but quite rightly has a devoted cult following, which I expect will flock to Robert G. Folsom’s new book, The Life and Mysterious Death of Ian Mackintosh (2012).  Mackintosh was the enigmatic creator and writer of The Sandbaggers, and Folsom’s book examines his life in detail, as well as providing insight into the TV series.

A former Royal Navy officer, Mackintosh was almost certainly a spy for British intelligence in the sixties and seventies, but so few records were kept – and Mackintosh was so coy and secretive on the subject – that there’s very little in the way of specific evidence.  Folsom sorts through the material, and gathers theories and impressions from the friends, family, and Sandbaggers collaborators who knew him best.  The final picture, even after 160-odd pages, is still rather muddy, and yet he’s an intriguing figure, especially in light of the eerie and unexplained circumstances of his death.   On July 7th, 1979, Mackintosh and two companions sent out an S.O.S. while flying a small plane off the coast of Alaska in the northern Pacific.  By the time rescue teams arrived, they had vanished without a trace.

Anyone interested in Mackintosh, The Sandbaggers, or the subject matter in general – Cold War history, unsolved mysteries,  behind-the-scenes insight into TV production, and the spy genre in general  – should find plenty to enjoy in the book.  I certainly found it interesting and generally well written, if occasionally disorganized – the alinear narrative jumps around a bit and occasionally repeats itself.  But in general I enjoyed it, particularly for its behind-the-scenes glimpses at the show’s production.  (The extended interview with Roy Marsden, who memorably played Neil Burnside on the show, is particularly worthwhile.)  And the chapter “Without a Trace,” which details the events leading up to Mackintosh’s disappearance and the subsequent investigation, is a highlight – a true puzzler that has inspired many theories.  Did he defect, or otherwise plan his disappearance?  Was he on a secret mission, or merely researching story ideas for the show?  Or was it simply a joyride gone wrong, and a tragic accident?  Folsom lays out the facts and sifts through the speculation engagingly.  It certainly feels like a real-life spy story.  In the end, Mackintosh remains a nebulous figure, perhaps the way he would have wanted it.