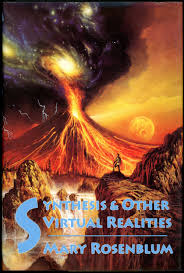 I’ve read a couple of Mary Rosenblum’s novels, but until now I’ve been unfamiliar with her short work…or so I thought, anyway.  Her collection Synthesis & Other Virtual Realities (1996) consists of nine substantial stories from the early 1990s, many of which share worlds and ideas — and were possibly expanded into? — her early novels The Drylands and Chimera.  It’s a beautiful hardcover from Arkham House, and a nice snapshot of thoughtful and prescient work from that decade.

Rosenblum’s prose is crisp, simple, and effective, and while I thought most of the stories felt slow — particularly in their early pages — I also think they’re satisfying and immersive, and I came away from the collection preferring her work at this length.  Best for me was the title tale “Synthesis” (part of the basis, I believe, for Chimera).  It’s the moving story of a man caught between familial duty and artistic ambition; in it, a hobbyist designer of VR-scapes is drawn into business affairs by his strict, no-nonsense father, which ultimately entangles him in corporate espionage even as he continues to pursue his art.  There are also some solid tales set in the world of The Drylands, a universe wherein Rosenblum memorably blends environmental SF with mysterious super-powers.  Most striking of these is probably “Stairway,” much of which is set on an iceberg train, transporting frozen water from Antarctica to the parched urban wasteland of Los Angeles.  Other stories that seem ahead-of-their-time include “Entrada,” a prescient glimpse of 21st century class struggles, and “Bordertown,” which muses on the future of immigration and border security.  I was also rather fond of “Flood Tide,” a classic SF tale of a father who fears losing his son to an interstellar lifeship journey.

Overall it’s a rich, vivid, and forward-looking collection of nineties SF, blending pre-Mundane SF concerns (the environment, the information economy, genetic engineering, cyberspace) with more classic SFnal themes and ideas, such as the nature of reality and identity. An excellent collection.