Novel: The Bridge of Sighs by Olen Steinhauer 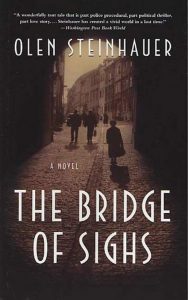 Olen Steinhauer’s The Bridge of Sighs (2003) is the first book in a five-volume series of historical spy thrillers set in a fictional Eastern European country.  The series spans the second half of the twentieth century, its characters and setting sandwiched precariously in between the Soviet Union and the western world for the duration of the Cold War.  My usual MO is to alternate authors from book to book, but I thought it might be a nice change of pace to read a series from beginning to end for a change, so I’ve decided to read these in sequence.  If this opening volume is any indication, I’m really going to enjoy the ride.

The Bridge of Sighs starts in 1948, as the Iron Curtain descends, and its hero is Emil Brod, a 22-year-old, fresh-faced recruit of the People’s Militia who just managed to avoid fighting in World War II.  Brod is assigned to the Capitol city’s Homicide department, where he hopes to make a career for himself as an inspector.   But he gets off to a rocky start, meeting with an ice-cold reception from his squadmates, who seem determined to drive him out.   When he finally does land a case, it turns out to be a thorny one:  investigating the brutal murder of ne’er-do-well songwriter Janos Crowder.  Brod’s investigation gradually peels back the mystery of Crowder’s death, meanwhile entangling him with the victim’s beautiful widow Lana.   And along the way  he encounters, at every turn, the systemic paranoia and corruption of the communist system that permeates the post-war atmosphere of his homeland.

Steinhauer’s more recent Milo Weaver series wowed me with its convoluted, ingenious plotting and action-adventure pyrotechnics.   By contrast, The Bridge of Sighs is a far more subdued and linear narrative, but equally compelling – a carefully clocked, atmospheric, and evocative historical noir.  To a degree, this first volume mines Alan Furst territory:  the shadow of World War II looms over the proceedings, which examine the plight of the many unfortunates caught in the ideological crossfire and twisted-up political machinery of their times.   And so it feels right that Steinhauer, amazingly, manages to write the entire novel without naming the country.  It’s an anonymous Slavic  territory situated somewhere near the blurry intersection of Romania, Hungary, and the Ukraine, a vividly eerie nowhere that could stand for any of the nations that suffered a similar fate.   This lack of specificity affects the suspension of disbelief not at all; it’s an impressive feat of craftsmanship, to say the least.

Even setting aside the thematic and historical material, at its core The Bridge of Sighs is also a cracking good story:  a dark, engrossing mystery full of excellently defined characters, and it’s all beautifully put together, the various plot elements integrated with nary a loose thread or extra word.  I’d rank it among the best spy novels I’ve ever read, and I’m definitely looking forward to seeing this setting explored further in subsequent volumes – all the way through the Cold War, right up to Glasnost.

Film: World on a Wire