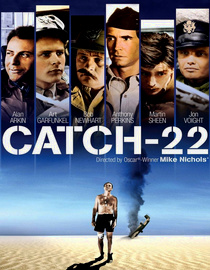 I watched Catch-22 (1970) about twenty years ago, and  remembered it as a sluggish, disappointing adaptation of the brilliant Joseph Heller novel.  Time’s done something to my perspective; I gave it another try over the weekend and loved it.  Hollywood doesn’t make this kind of movie anymore.

Alan Arkin stars as the beleagured Yossarian, a captain for the Army Air Force running bombing missions over Italy during World War II.  He’s the lone sane man in a unit full of nuts:  too sane, in fact, to get out of flying the constantly escalating number of missions required for rotation out by his villainous CO Colonel Cathcart (Martin Balsam).  As the absurdity and insanity of the war mounts, Yossarian continues to seek a way out.

I can see why the younger version of me found this film unsatisfying — the novel, with its circular, alinear structure, is more than the sum of its parts, and replicating its unique style and message on film is a tall order.  Director Mike Nichols and writer Buck Henry don’t always focus their energies on the right things, I think; in particular, there’s casual sexism and some general pacing issues.  But for some reason, this time the melange of Pythonesque stream-of-consciousness, scathing political commentary, and dark, dark humor clicked with me.  It’s possible that in a post-9/11 world, the film Catch-22 has become even more relevant, and looking back on it now it seems way ahead of its time in both form and content.  Plus it’s got that experimental, trippy, anything goes 1970s cinema vibe going on, a refreshing change of pace from today’s sterile, over-produced Hollywood product.  Arkin is perfect, and the supporting cast is a who’s-who of film icons:  Orson Welles, Anthony Perkins, Martin Sheen, Jon Voight, Charles Grodin, and on and on.  It’s imperfect, and weird, and requires a certain amount of patience, but it’s also quite interesting and worthwhile. 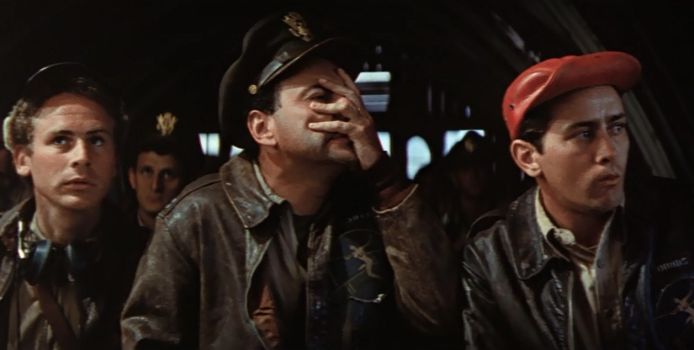