I went into Argo (2012) armed with virtually no knowledge about it, other than that it was a spy film with generally positive buzz. This movie blew me away. It’s the most riveting, gut-wrenchingly suspenseful film I’ve ever seen, and if you know nothing about it yet, I suggest going in blind.  (In other words, stop reading and go see it. Then come back and see if you agree!)

During the Iranian hostage crisis in 1979, six embassy employees in Tehran escape and find sanctuary with the Canadian ambassador. When the State Department gets wind of this, a plan to get them out is hastily organized — for if it’s discovered they’re still at large, the Iranians may execute them as spies. Enter CIA agent Tony Mendez (Ben Affleck), an expert in exfiltration operations. When it becomes clear that there really is no good plan for rescuing the six, Mendez comes up with a plan so ballsy and audacious that it just might work. To that end he recruits a pair of cynical Hollywood insiders (Alan Arkin and John Goodman) to help sell the enormous lie that will make the operation possible.

Based on a true story — which, if you’re unfamiliar with the outcome, actually serves to increase the suspense rather than diminish it — Argo is a brilliantly executed historical caper film. Talk about impossible missions; Jim Phelps has nothing on Tony Mendez, and it’s all the more astonishing in that it actually happened.

Well…mostly. Go read this article in Slate to see how Argo differs from reality. Turns out the script, in true Hollywood fashion, takes many a liberty with actual events. But what effective liberties they are, punching up the drama and urgency throughout. The script is tight as a drum, and ramps up brilliantly; the finale in particular is unnervingly suspenseful. At the center of things, Affleck makes for a courageous, if rather morose, hero, and the cast is peppered with familiar, well placed character actors  — many of them virtually unrecognizable under shaggy 1970s disguises. Arkin and Goodman provide the comic relief, and easily steal the show as the movie industry bullshit artists who help Mendez set the plan in motion.

An enthralling film:  go out of your way for this one! 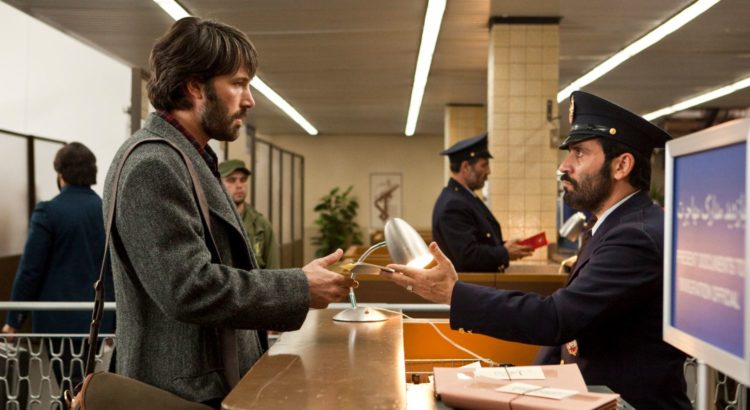