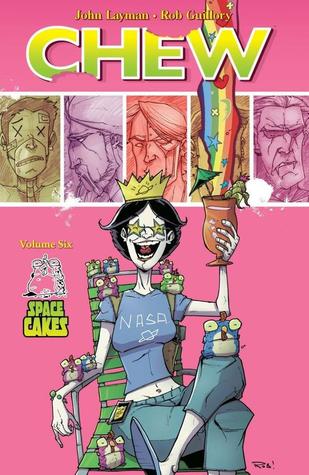 I’ve been doing a lot of comic book binging lately, but for all that reading, there are only two titles that I’m convinced I’m going to go back and re-read multiples times.  One is Queen & Country (which I’ve already read through twice, in fact, but expect to go back for more).  The other one is the magnificent Chew, John Layton and Rob Gullory’s marvelously funny, disgusting, colorful, and transgressive serial about super-powered foodies in a world decimated by bird flu.  The latest volume, Space Cakes, gathers issues #26-30 in the ongoing series – with a bonus story involving the lethal robotic secret agent chicken, Poyo.

With cibopathic FDA agent Tony Chu on the sidelines after the events of Major League Chew, Space Cakes shakes up the formula by following the exploits of Tony’ sister, Toni – aka Antonelle Chu, agent of NASA.  Antonelle is a “cibovoyant,” capable of telling a person’s future by tasting them – a skill that’s led to a bad habit of biting her boyfriends.  The episodes of this volume follow her through a number of missions, often in collaboration with other familiar faces from rival intelligence agencies (the FDA and the USDA, of course).  The rich and inventive world of Chew continues to develop here, even as the main character is almost completely offstage.

Chew is often gross, but it’s also wildly funny, clever, endlessly inventive, and constantly surprising, and Space Cakes delivers more of the same and then some.  This sequence in particular has some particularly skillful stake-raising moments, and one heartbreakingly sweet one as well.  An excellent continuation of a superb series, that adds some eye-opening lore and hints at even more awesomeness to come.  Highly recommended.

Collection: The Bible Repairman and Other Stories by Tim Powers