Novel: After the Fall, Before the Fall, During the Fall by Nancy Kress 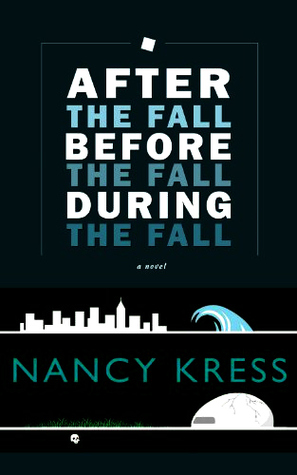 The story follows two converging tracks. In 2035, a teenager named Pete lives in the Shell — a safe haven in a world rendered uninhabitable by an environmental cataclysm. The inhabitants of the Shell are humanity’s last survivors, imprisoned by an alien race known as the Tesslies, who are responsible for the Earth’s destruction.  Pete and his companions have one hope of saving humanity: alien time travel technology, which enables them to collect people (preferably female children) and supplies from the past.

In 2013, meanwhile, a mathematician named Julie works with an FBI task force to solve a series of mysterious thefts and child abductions along the eastern seaboard of the United States. Julie has her own personal struggles and concerns, but they soon begin to pale in comparison to the mysteries she uncovers in her work.

Obviously the two scenarios are linked, and Kress spins them together masterfully — “after” and “before” coming together for the “during.” Kress’ story-telling is as smooth and satisfying as ever, and while the links between the two timelines are obvious, there’s still an air of compelling mystery to each thread. While Pete is a bit shrill, he remains understandable and sympathetic; Julie is definitely the more likeable protagonist. That said, they’re both effective viewpoint characters for the story, which escalates to a satisfying resolution that comments powerfully on humanity’s impact on our world. A worthy Nebula nominee, recommended.