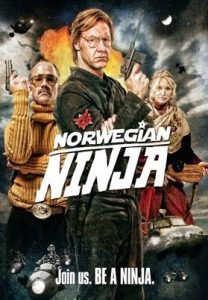 It’s mostly coincidental that I should happen across Norwegian Ninja (2010) right after rewatching Breach.  From an incisive character portrait of a notorious American traitor, to a fanciful secret history reimagining the life of a notorious Norwegian traitor? What are the odds? You’d think I watch spy movies or something.

The subject of this amusing fictional mash-up is the very real Arne Treholt, a Norwegian politician convicted of high treason in the 1980s for selling secrets to the KGB. The movie, uh, spins his case…Treholt (Mads Ousdal) is recast as the secret commander of a Norwegian ninja squad, based on an island off the coast and bravely patrolling the fjords. His mission: protect the country from the Russian submarine menace. But they actually have a more sinister enemy:  Stay Behind, a CIA-funded international terrorist organization with the mission of exacerbating the Cold War by committing atrocities against western countries and blaming the Russians. In this alternate reality, Treholt is not a traitor to western democracy, but a heroic behind-the-scenes combatant against  right-wing tyranny — a kind of Scandinavian Harry Tuttle.

Yes, there is a political position at the core of this weird little satire, but I didn’t feel it overpowered the zany, inventive tone. Not exactly laugh-out-loud funny, the film it nonetheless appealingly bizarre, a weird mix of cinematic genres from the conventional (spies, martial arts, fantasy) to the less so (mockumentary, found footage). For me it was a mildly enjoyable hybrid of a boatload of things I’m interested in; for others, I suspect the mileage will vary widely.