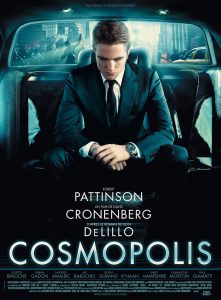 The latest David Cronenberg opus is a disappointing slog. Cosmopolis (2012), based on the book by Don DeLillo, is a pretentious extended metaphor about the journey of wealthy asset manager Eric Packer (Robert Pattinson) across Manhattan during a disruptive presidential visit. From his luxurious stretch limo, Packer dispassionately tracks the demise of his absurd wealth in a currency speculation crisis.  Meanwhile he consults subordinates, evades anticapitalist riots,  flatly interacts with his frosty wife (Sarah Gadon), has random adulterous encounters , and half-heartedly tracks ongoing threats to his life.  He’s a billionaire with a target on his back, and he’s on a collision course with financial ruin, but is it of his own design?

Cosmopolis reminded me a little of Holy Motors – another artsy limo ride through symbolic streets.  Unfortunately this time the traffic is worse and there are more potholes.   With a script full of semi-poetic political screed, it’s something of a high concept  “bottle show” relying on claustrophobic interiors, heavy-handed metaphor, and archetypal characters to paint an unsubtly veiled portrait of class warfare.  The largely unpronounceable script, while enlivened occasionally by inspired turns of phrase, gives the cast fits – especially the wooden Pattinson, who struggles to carry the day.  Only heavy hitters like Samantha Morton and especially Paul Giamatti (who arrives, like the cavalry, to rescue the film in its dying moments) come off well.  At its best, it produces some mildly interesting sociopolitical commentary, a wonky, sideways time capsule of early 21st century capitalism. But at its worst, it plays like an election cycle Facebook argument between informed but unconstructively ranting political opponents.